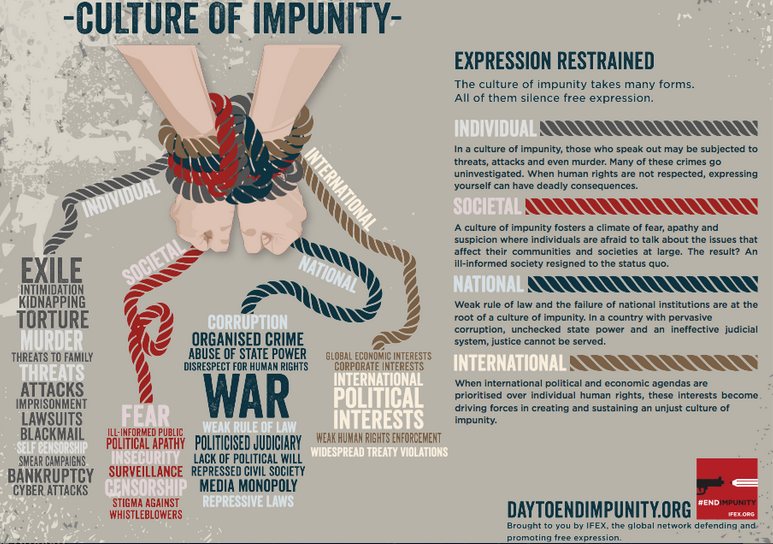 “When someone acts with impunity, it means that their actions have no consequences. Intimidation, threats, attacks and murders go unpunished. In the past 10 years, more than 500 journalists have been killed.

Murder is the ultimate form of censorship, and media are undoubtedly on the frontlines of free expression. When journalists have been murdered, in 9 out of 10 cases the murderers have gone free. Countless other citizens, writers, artists, bloggers, musicians and journalists have been harassed, threatened, tortured, intimidated, jailed and worse for exercising their basic human right to express themselves. Most crimes against free expression go unpunished.

The Day to End Impunity is a yearly global initiative to demand accountability for those who have been targeted for exercising their right to freedom of expression, and empower organisations, government bodies and individuals to help dismantle systems of impunity around the world.

The campaign date of November 23 each year marks the anniversary of the 2009 Maguindanao, Ampatuan massacre, when 58 people – including 32 journalists and media workers – were murdered in the Philippines. To date, none of the perpetrators have been brought to justice. It is known as arguably the worst case of impunity for crimes against the media on record.

In December 2013, the United Nations passed a resolution on the safety of journalists, and declared 2 November the International Day to End Impunity for Crimes against Journalists.

PEN Melbourne stands with our colleagues as part of a global movement to end impunity. We ask that PEN members add their voices to the campaign by clicking here.