On the 25 November, a dynamic coalition of civil society organisations launched www.thisisnetneutrality.org, which includes a basic, collaborative, and universal definition of net neutrality. The diverse coalition includes more than 35 groups from 19 countries, such as South Korea, Venezuela, Nigeria, Kenya, India, Germany, Pakistan, the United Kingdom, Chile, Bangladesh, Colombia, and the Netherlands.

The coalition agreed upon the following definition, which has been translated into 11 languages, including Mandarin, Spanish, Dutch, Arabic, Korean, and German: “Net neutrality requires that the internet be maintained as an open platform, on which network providers treat all content, applications and services equally, without discrimination.”

This global coalition could not have come together at a more critical moment. In the U.S., net neutrality has finally become a kitchen-table topic, following President Obama’s breakthrough statement in which he called for the Federal Communications Commission to pass bold rules protecting the open internet. Meanwhile, the European Union could soon pass landmark net neutrality legislation, with the Telecoms Single Market proposal currently sitting with the Council of the European Union.

“This dynamic coalition shows the importance of net neutrality to every internet user around the world. The open internet remains a crucial driver of education, expression, innovation, health, and creativity; every internet user everywhere deserves equal access to this revolutionary medium. Advocates and decisionmakers around the world are watching the contentious net neutrality debates in the U.S. and the EU. The decisions made in those regions will set global precedents for how to ensure and protect a neutral, non-discriminatory internet.” –Josh Levy, Advocacy Director at Access

Access defends and extends the digital rights of users at risk around the world. By combining innovative policy, user engagement, and direct technical support, we fight for open and secure communications for all.

Isik Baris Fidaner of Alternative Informatics (Turkey), said:
“We think that net neutrality matters. We also think that it should not be reduced to technical solutions. The first aspect that we would like to emphasize is accent-neutrality. The letter accents used in our country have constituted a vessel of modernisation since they were invented a hundred years ago. They have also constituted a vessel of exploitation and colonization by denying and forbidding other letter accents. The use of Unicode hence should be seen as a world-historical matter that concerns net-neutrality. The second aspect is content-neutrality. A text’s meaning is determined by the organisation of its elements. But this organization is also a part of the text’s content, it cannot be something separate and above this content. Therefore, net-neutrality cannot simply be regarded as a technical problem, it is a matter immanent to the text-operative content with which one is engaged on the internet. In other words, just as there can be no meta-language, there can be no meta-data. Fields of study like digital humanities and big data hence should also be seen as belonging to the matters that concern net-neutrality.”

“Protecting the plurality and diversity of information is fundamental to securing the right to freedom of expression for all. Unfortunately, they are under threat by moves to end “net neutrality” – the principle that those controlling the internet infrastructure should not interfere
or discriminate between the types of data that travel along it.”

“Now we have a resource for the world to discover and for policy makers to know that net neutrality matters so that they can make informed decisions about the future of the internet.”

“This coalition understands that net neutrality is not just a technical issue but also a fully political one. It’s not just a consumers issue but a substantive one. Chile and Peru have groundbreaking net neutrality law provisions and the Inter-American system of human rights sees net neutrality as a human rights issue. Its presence can guarantee 2fundamental rights such as freedom of expression and privacy for citizens worldwide, and therefore its defense has to be global.”

“The significance of net neutrality in Pakistan cannot be ignored. With a fledgling infrastructure and a booming startup and entrepreneurship culture, net neutrality has a big part to play. Net neutrality can help raise awareness about internet censorship issues and champion the cause of internet freedom and the right to free speech worldwide. Pakistan is still in its infancy in terms of net neutrality, but its application is nevertheless significant and cannot be ignored at any cost. It is a principle that advocates for the equality of internet traffic online and no discrimination, and it encourages innovation and creativity that will only enhance the worthiness of the internet even further. Net neutrality is a principle that advocates for opportunities for any netizen online irrespective of class, creed, or culture.”

“We love the openness and accessibility of the internet, but we worry about it coming under threat from those who want to surround it with gates and toll booths. In cases where market competition isn’t sufficient to dispel these threats, open internet rules can help.”

Arzak Khan, director of Internet Policy Observatory (Pakistan) said:
“Internet Policy Observatory Pakistan has joined the Global Coalition for Net Neutrality to highlight the importance of net neutrality to users and policy makers in Pakistan. The issue of Net Neutrality is very important for internet uses in Pakistan, as existing telecommunications law in the country, while prohibiting “unjust discrimination” by ISPs, does not effectively enforce net neutrality. The existing laws do not sufficiently prevent the possibility of ISPs offering tiered services to content providers, thereby turning the internet into a two-tiered network on which corporate content is prioritized over other content. Net neutrality means that every site on the internet runs on the same speed. That way, startups in Pakistan
and other countries can compete with big Internet giants like Facebook, Twitter, and Google.”

“Public Knowledge is proud to support the global initiative, thisisnetneutrality.org. Net neutrality is important for all of the world’s internet users, and it is just as essential for countries with robust internet infrastructure as it is for those still building infrastructure. Being able to find common ground on net neutrality with organizations in North America, Europe, South America, Africa, Asia-Pacific, and the Middle East and North Africa helps demonstrate the need for us to continue fighting for strong net neutrality principles at home and help our partners abroad.

Thisisnetneutrality.org will be an important resource hub for internet users and policymakers from the United States and around the world to understand net neutrality and make informed decisions on behalf of the open internet.” 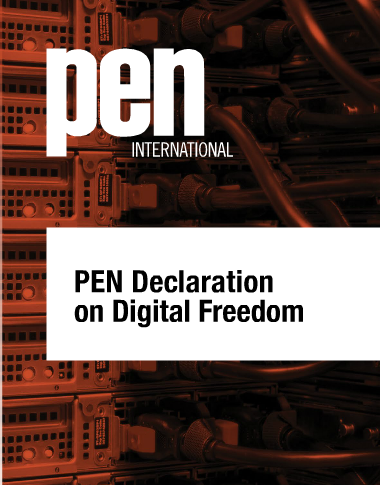 PEN recognizes the promise of digital media as a means of fulfilling the fundamental right of free expression. At the same time, poets, playwrights, essayists, novelists, writers, bloggers, and journalists are suffering violations of their right to freedom of expression for using digital media. Citizens in many countries have faced severe restrictions in their access to and use of digital media, while governments have exploited digital technologies to suppress freedom of expression and to surveil individuals. The private sector and technology companies in particular have at times facilitated government censorship and surveillance. READ MORE