The tiny island of Nauru has shut down services on the internet.

The island nation of Nauru may be tiny — it’s only 21 square kilometers (8.5 square miles) — but what is happening there matters to people around the world. This month, the Nauru government officially announced it would block Facebook and internet services until it could pass measures to protect its residents from “abusive” content online.

But here’s the thing: Governments should NEVER shut off any part of the internet. Period.

The Nauru government has made it a criminal offense for anyone to make a statement that “coerces, intimidates, harasses, or causes emotional distress to a person” if the statement is “likely to threaten national defence, public safety, public order, public morality or public health.” This wide standard could send people to jail for what they say on- or offline. It’s bad for journalism, for free expression, and for the ability to enjoy basic rights.

Nauru operates an immigration detention center (funded by the Australian government) for people seeking asylum in Australia. Men, women, and children are held there — often in abusive conditions — while authorities decide whether to grant them full refugee protection and resettlement on Nauru, Papua New Guinea, or Cambodia, but not Australia, the country they are seeking asylum in. The detention center is located in the steaming hot center of the island, as far from other people as it is possible to get in Nauru. Without the internet, asylum seekers in Nauru are losing vital connections to loved ones, colleagues, and family that internet services can provide, something that could make a difference in their efforts to get asylum. This needs to stop.

Sign the petition to tell the government of Nauru to turn the internet back on! 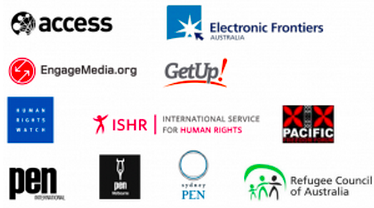