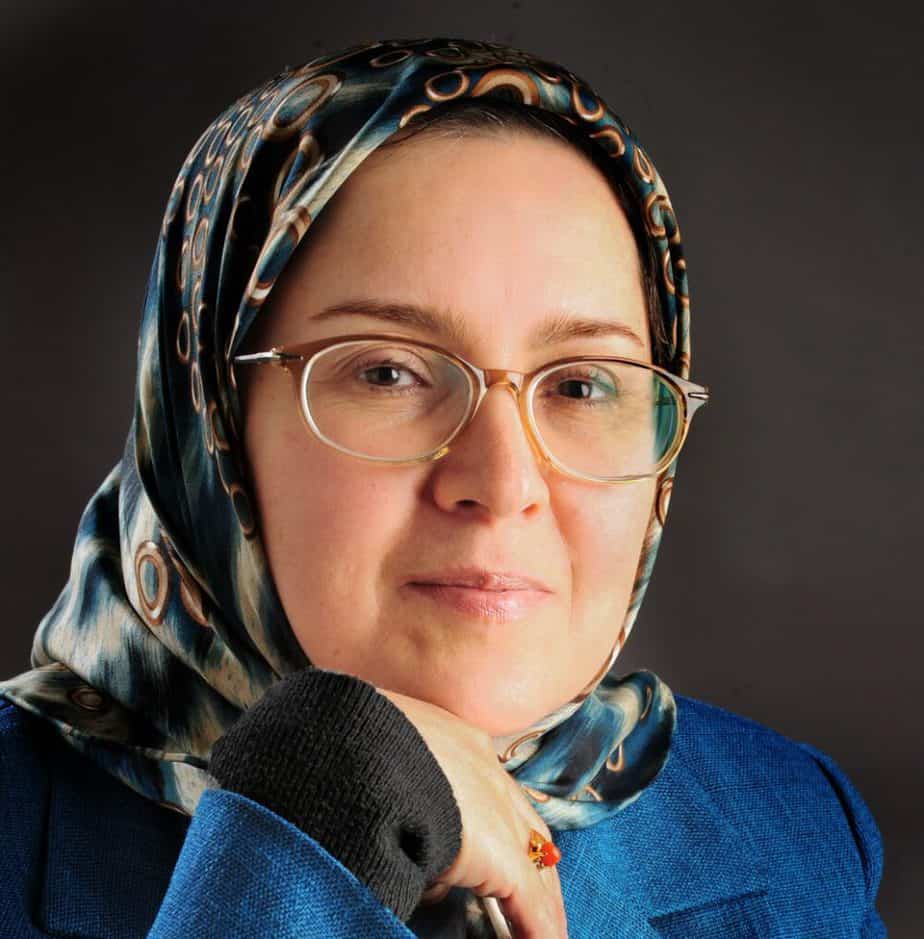 Sedigeh Vasmaghi is a theologian, poet, writer, and women’s rights activist who has written on a broad sweep of theological, political and social issues. She is highly regarded in Iran and abroad for her commentary on Islamic jurisprudence in Iran.

In August 2020, Vasmaghi was sentenced to one year in prison for signing a petition criticising police brutality against protestors who had participated in demonstrations in November 2019. This sentence has been added to a five-year prison suspended term served on her in 2017, a total of six years. She remained free on appeal until October 2020 when her sentence was upheld. She is currently waiting to learn when she will be required to enter prison.

Vasmaghi has for decades lived under constant surveillance and harassment, and her books are banned in Iran. She left Iran in 2011 to spend six years in exile in Germany and Sweden before returning in 2017. This sentence is the latest attempt to stifle Vasmaghi’s critical and independent commentary.

PEN International considers the sentences to be a clear breach of Sedigeh Vasmaghi’s right to freedom of expression and calls for them to be rescinded.

Ask the authorities to:

Supreme Leader of the Islamic Republic of Iran

Head of the Judiciary

President of the Islamic Republic of Iran

Send copies to the Embassy of Iran in your country: https://embassy.goabroad.com/embassies-of/iran

We encourage PEN members to continue to:

Please let us know about your activities and actions. This helps us monitor the impact of our campaigning.

“You can imprison my body, but never my conscience! I protest against all injustices and oppression, and against the imprisonment of the innocent.” Sedigeh Vasmaghi

Imprisoned writers rely on PEN to advocate for their freedom and to defy those who want to silence them. From practical support for writers seeking asylum or in exile, to using our platforms to share their words, to putting pressure on the powerful – this work is only possible with your support.

It is terrible to think that you have been sentenced for signing a petition criticizing police brutality against protestors.

Don’t the Iranian authorities know that putting one’s name to a petition is an everyday act? Don’t they know that people have engaged in petitioning for thousands of years and that the first documented petitions come from the time of Egyptian pyramid-building, when slaves called for improved working conditions. Governments have been addressed by petitions and petitioners ever since – from Imperial China to present day America and every historical moment and geographical locus in between. Around the world petitioning remains a way for people to find redress for grievances.

A grandmother, you bravely chose to return to Iran despite an earlier five-year sentence to which this new one has been added. The Iranian government has none of your bravery. It seems to be afraid of a writer of your talent and stature, a woman whose prizewinning poetry and translations from the classical Arabic have delighted generations, a rare woman who has taught law in her native land and abroad and whose scholarly work on Women, Jurisprudence, Islam (2014) and studies of polygamy have long informed legal thinking in the field and are now banned.

If the state had confidence in its own power and acts, it would hardly need to silence you. We know that if they put you in prison, you will carry on writing and protesting. Injustice doesn’t disappear with the bolt clanging shut on a prison cell. The brutality of the massacre you petitioned against remains a blot on Iran’s history and in the memory of its people. Around the world other writers stand beside you as do the people who have survived their ruler’s misdeeds.

In his Nobel Prize acceptance speech, the great dramatist Harold Pinter asserted that political power was maintained by the creation of a vast tapestry of lies, by keeping people oblivious to the truth. The role of the writer thus becomes to rescue language, to speak truth and stand up to power: ‘I believe that despite the enormous odds which exist, unflinching, unswerving, fierce intellectual determination, as citizens, to define the real truth of our lives and our societies is a crucial obligation which devolves upon us all.’

Sedigeh, you have done this for many years. We stand beside you.

We hope that the Iranian government will stop short of the injustice of your imprisonment and also recognize the common right of petitioning.

Sedigeh Vasmaghi is one of a small number of women who have taught Islamic law in Iran, and her publications include Women, Jurisprudence, Islam (2014), translated into English and German but banned in her home country. Other works include Polygamy within Islam and Temporary Marriage with Islam and Cohabitation in the West, alongside numerous newspaper and journal articles. She held a research post on family law at Sheffield University, and served as a guest lecturer Georg-August-University of Göttingen, Germany.

Vasmaghi is also a poet and published her first poetry collection, Praying for Rain, in 1989, for which she received the 1991 Best Book Award by the University of Al-Zahra, Tehran. Since then, she has published five collections of poetry. She has also translated classical Arabic poetry to Persian. Read some of her poetry.

Sedigeh Vasmaghi has long been the subject of attempts to silence her critical voice. For instance, in 1997 she was served a two-month prison term for an article on discussions between a government deputy and a British official, a sentence that was quashed by the Appeal Court, after international pressure by human rights groups including Amnesty International.

The harassment continued. Then in February 2011, the Iranian Security Ministry issued an order for Vasmaghi’s arrest. She went into hiding before fleeing the country in March 2011 for Germany where she took up a post of guest professor at the department of Islamic Studies, University of Göttingen, in the department of Islamic Studies. In 2012, she moved to Uppsala in Sweden as an International Cities of Refuge (ICORN) resident. When her residency ended in 2014, she stayed on as a research fellow at Uppsala University.

Then, on 14 October 2017, Vasmaghi, along with her husband, left Sweden to return to Iran. On her arrival she was detained for several hours at Tehran’s International Airport before being released to appear before the Tehran Revolutionary Court on 22 October. During a 10-minute hearing, the judge mentioned a previous court ruling pronounced against the writer before her departure abroad, as well as her opposition to the practice of stoning women found guilty of adultery.

Vasmaghi was taken to Evin prison, then released on bail on 4 November 2017. Vasmaghi’s appeal was held on 16 May 2018 and she was given a five-year suspended sentence. In September 2019, she was banned from leaving the country.

Despite this, Vasmaghi continued her political activism. In June 2020 she was served with a court summons related to a petition that she had signed, alongside over 70 others, protesting alleged police brutality against demonstrators who had taken part in rallies in November 2019 against oil price rises. The petition implicated police in the deaths of hundreds of the protestors. The court stated that there had been no evidence of brutality and that the petition was politically motivated.

Vasmaghi refused to attend the court hearing that was held on 4 August, instead issuing a lengthy statement in which she questioned the legitimacy of the court to hear her case. In it she also referred to other accusations levied against her including talking to Persian-language media outside Iran, recommending negotiations between the USA and Iran and for signing another petition earlier in 2019 calling for the separation of religion from state. She was sentenced to one year in prison. Vasmaghi’s appeal against the sentence was over-turned, and she will now be required to enter prison to serve this sentence alongside a previous five-year term, for a total of six years’ imprisonment.

You can imprison my body, but never my conscience!

I protest, not only against the contents of the verdict which openly state that the judicial system does not believe in the value of freedom of expression and the right to protest,

Rather, I protest against the government that has ruthlessly ridiculed justice, and that abuses the judicial system, the courts, the prisons, and the judiciary to suppress protest, even in its most peaceful form, which is issuing a statement.

I protest against the government that wants to force us to remain in a shameful silence in the face of injustice and knowingly and deliberately will not allow conscious and responsible citizens to fight the destruction and disorder with their civil rights.

I protest against the government that wants to deprive us of humanity and turn it into indifferent and silent statues.

I protest against the government that has woven tension and conflict into its cloth, conflict with everyone, with its people and the world, and which, with its least honourable policies, has deprived us of physical and spiritual peace and security.

I protest against all injustices and oppression, and against the imprisonment of the innocent.

I am still protesting against the brutal massacre of November 2019. Wherever I may be, even in prison, I protest and will protest against injustice.

You can imprison my body, but never my conscience! I prefer prison to shameful silence in the face of injustice and corruption.

Wise Jibreel will open the lock one day

The key to the prison will be found, grieve not