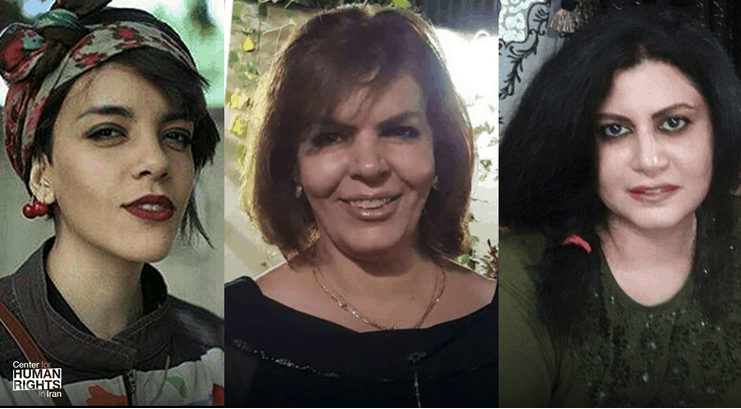 As part of a new policy to isolate political prisoners by incarcerating them alongside common criminals at various prisons in Iran, three women convicted of national security crimes for opposing Iran’s mandatory hijab laws were recently transferred out of Evin Prison’s Women’s Ward, the Center for Human Rights in Iran (CHRI) has learned.

Yasaman Ariyani and her mother Monireh Arabshahi, were transferred to Rajaiee Shahr Prison in Karaj, west of Tehran, and Samaneh Norouz-Moradi to the central prison in Roudsar, northern Iran.

The move follows the sudden transfer of human rights lawyer Nasrin Sotoudeh from Evin Prison in Tehran to Gharchak Prison in the city of Varamin, south of Tehran, on October 13, 2020, under the pretext that she has been convicted of a common crime and no longer “qualified” to be in a security ward.

“I heard about the transfer of my clients through another prisoner and I was shocked,” attorney Babak Paknia, representing all three activists, said in an interview with CHRI on October 22, 2020.

“The judicial authorities justify their action by pointing to new circumstances in prisons in the coronavirus era and they believe it would be preferable to send prisoners convicted of common crimes to cities of their birth,” he added.

However, the fact that all communications regarding the three women was with a judge presiding over security cases, debunks the claim that their convictions were for a common crime, Babaknia noted.

“This shows that despite what the authorities are saying, my clients have security convictions and moving them to the cities of their birth under the guise of being common criminals, is unacceptable,” the attorney told CHRI.

Attorney: They are using “trickery and lies” to transfer prisoners

Yasaman Ariyani is a theater actress arrested on April 10, 2020, for anti-forced hijab campaigns, serving a five-and-a-half-year prison sentence for “encouraging people to corruption and prostitution,” “assembly and collusion against national security” and “propaganda against the state.”

Her mother Monireh Arabshahi, arrested on April 11, 2020, is a civil activist and anti-compulsory hijab protester serving the same sentence.

Samaneh Norouz-Moradi, arrested in August 2018, is serving a sentence for “assembly and collusion against national security through membership in adversary channels (on the Telegram messaging app), such as the campaign for the return of the Prince [Reza Pahlavi], “insulting the Founder of the Islamic Republic and Leader of the Revolution [Rouhollah Khomeini]” and “propaganda against the state.”

In July 2020, Norouz-Moradi was also sentenced to an additional 15 months in prison for chanting “long live the shah (king)” in a video message.

All three women were transferred thinking they were meeting their lawyer, according to Babak Paknia.

“I got the news from inside (Evin) Prison that Yasaman Ariyani, Monireh Arabshahi, and Samaneh Norouz-Moradi were told by agents that their lawyer wants to meet them,” Paknia told CHRI.

“With that in mind, my clients were taken out of the ward and then moved to prisons in Karaj and Roudsar.”

The attorney continued: “The repeated use of trickery and lies to transfer prisoners a short time after doing the same against Nasrin Sotoudeh, raise a lot of questions.

“If the judicial authorities want to transfer prisoners, they can do so very easily since prisoners don’t have much power to resist. Using tricks is unjustified. It will add to the judiciary’s notoriety in people’s minds.”

Meanwhile, human rights lawyer Nasrin Sotoudeh’s transfer on October 13, 2020 from Evin Prison’s Women’s Ward, where she had been returned from hospital against the doctors’ urgings, to Gharchak Prison, which is notorious for its dangerous and inhumane conditions, has caused significant concern, given her deteriorated medical condition after her hunger strike from August 11 to September 26.

On October 20, 2020, the head of public relations for the Tehran Province Prisons Organization was quoted by the judiciary’s official news agency, Mizan, that Sotoudeh transfer was in compliance with her sentence.

[He did not specify what the “common crime” was.]

The PR official added: “As a result of combining all her other convictions in accordance with Article 134 of the Islamic Penal Law, the maximum punishment applied to this prisoner will be 12 years in prison.”

He continued: “In reference to Note B of Article 7 of the Regulations for the Separation and Classification of Prisoners, prisoners convicted of a common crime—that would include Nasrin Sotoudeh—are not qualified to be held in a security ward.”

“Given that this sentence has recently become final and the 12-year prison sentence is mandatory, Nasrin Sotoudeh has been transferred to the general ward of the Tehran Province Women’s Prison (Gharchak Prison).”

According to women’s rights activist Shima Babaei, as of October 4, 2020, there were “about 40 political prisoners” in Evin Prison’s Women’s Ward alone.

Take Action For Them

The plight of Dr Kylie Moore-Gilbert has gained the attention of the world. Her unlawful and arbitrary detention is just one example of the Islamic Republic of Iran’s breach of obligations under international human rights laws, a situation made more acute in light of the COVID-19 outbreak. Many other women are under threat too including Bahareh Hedayat, Nasrin Sotoudeh who began a hunger strike on 11th August, and Narges Mohammadi who may have contracted coronavirus with underlying health conditions. They face life-or-death consequences.

UN experts, The Center for Human Rights in Iran, Amnesty International and PEN International have all called for the immediate release of these women before it is too late.

We urge you to email our Government and Opposition leaders to continue to press for the release of Kylie Moore-Gilbert and to raise concerns and advocate for the safety and immediate release of these courageous Iranian human rights advocates, Nasrin Sotoudeh, Narges Mohammadi and Bahareh Hedayat.

Below is a form letter you may wish to copy or adapt:

Today on World Humanitarian Day I write to you to express my concern for the safety of these three women, Australian, Dr Kylie Moore-Gilbert and Iranian Nasrin Sotoudeh and Narges Mohammadi.

Each of these women have their own complex circumstances of imprisonment by the Government of the Islamic Republic of Iran.

I write to you today because I am deeply concerned about their ongoing imprisonment and their precarious health and safety.

The Australian Government is well aware of the situation of Moore-Gilbert. I am aware that your representative in Tehran visited her at the notorious Qarchak Prison on August 2.

I urge you to continue your efforts.

However, I also write to urge your actions equally on behalf of these two Iranian women human rights advocates, Nasrin Sotoudeh and Narges Mohammadi. This request is in view of the Australian Government’s commitment to humanitarian concerns as a signatory to UN Conventions on Human Rights.

One of the key strategic priorities of the 2020 World Humanitarian Day is to contain the spread of the COVID-19 pandemic and decrease morbidity and mortality.

As you will be aware the growth of the COVID-19 pandemic led the Government of Iran to release on furlough over 85,000 prisoners. The law stated that those who had been sentenced up to five years in prison and served a third of their term were pardoned. This was significant action by the Government of Iran. However, this did not include political prisoners.

In this context, I urge the Australian Government to advocate for both Sotoudeh and Mohammadi.

Nasrin Sotoudeh was arrested in June 2018 for defending women prosecuted for appearing in public without a headscarf, or hijab.  She began a hunger strike on August 11, 2020 with a letter explaining her reasons. In her own words:

“In the midst of the coronavirus crisis engulfing Iran and the world, the situation facing political prisoners has become so difficult that their continued incarceration under these tyrannical conditions has become impossible.”…

“From the very start of the judicial process all the way through to sentencing, many suspects are denied independent legal representation or prevented from unrestrained consultation with their lawyers…

Given the lack of any response to communications and requests for the freedom of political prisoners, I am starting a hunger strike.”

Sotoudeh was also a key advocate in alerting the situation of Gilbert-Moore as a fellow prisoner in Evin Prison.

Narges Mohammadi has been committed to the care, protection and rights of political prisoners over many years and now finds herself in an increasingly precarious situation for her health and safety in prison.  Mohammadi has been imprisoned since May 2015 as part of a 16-year sentence.  She had been at Evin Prison and then in December 2019, was transferred to Zanjan Prison. It is recognised that her transfer to this second prison was carried out as further punishment for the peaceful protests she organised, whilst in Evin Prison, including against the apparent abuse by prison guards against other inmates.

Mohammadi suffers from a neurological disorder that can result in seizures, temporary partial paralysis, and a pulmonary embolism.  Whilst she has received some medical treatment, other medical attention has been seriously lacking.

It seems Mohammadi was given a COVID test but that the results have not been disclosed. There is serious concern that she may have contracted COVID-19 in Zanjan prison.

I write to you to raise your concerns and utilise all your efforts and capacities for the immediate and unconditional release of the three women, political prisoners in the Islamic Republic of Iran –   Australian Dr Kylie Moore-Gilbert, Iranians Nasrin Sotoudeh and Narges Mohammadi.

I welcome your urgent reply and action.

Please also include this address in Farsi. You may want to print it out and paste it on the address section of the postcard.

Please remember to align the text to the right-hand side of the page:

Australian academic Dr Kylie Moore-Gilbert has recently been moved from Evin Prison where she was often held in solitary confinement, amid grave reports about her deteriorating physical and mental health. Now she is in the notorious Qarchak Prison. She was convicted for spying but no evidence was provided to substantiate the charges.

Lawyer Nasrin Sotoudeh began a hunger strike on 11th August in Evin Prison, seeking the release of Political Prisoners amid COVID-19 outbreak. She was arrested in June 2018 for defending women prosecuted for appearing in public without a headscarf, or hijab.

Writer Narges Mohammadi. A group of 16 UN experts expressed grave concerns that Mohammadi contracted COVID-19 in Zanjan Prison.  Mohammadi has been imprisoned since 2015 when she was given a 16 year sentence for charges that stem from her work for political prisoners. In prison she continues to organise peaceful protests against abuse of other women inmates and has been charged again.

Civil rights activist Bahareh Hedayat was sentenced to 4.7 yrs in prison for protesting the downing of a Ukrainian passenger plane by Iran’s Revolutionary Guards. She is currently out on appeal. She previously served 6.5 years for  her peaceful civil rights activities. Hedayat is a senior member of the One Million Signatures Campaign for the Change of Discriminatory Laws Against Women.

Our festival #EnglishPEN100 opens tomorrow at @southbankcentre with a new work by @aiww commissioned for our 100th anniversary.

Join us for a weekend of events with writers, thinkers, activists who are defending our rights to write and read.