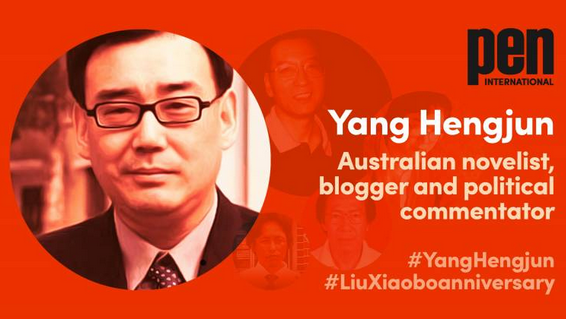 Yang Hengjun is an Australian novelist, blogger and political commentator who is committed to the advancement of human rights and political reform in the People’s Republic of China (PRC).

A keen commentator on Chinese politics and the virtues of democratic pluralism, Yang’s writing has been regularly featured in The Diplomat and his blog posts garnered a significant following on Chinese social media, earning himself the nickname of ‘Democracy Peddler’. As a novelist, he has authored a fictional spy trilogy known as the Fatal Series.

Yang was abducted by the security services when visiting the PRC with his family in January 2019, and on 7 October 2020 he was formally charged with espionage. If convicted, Yang faces a potential sentence ranging from three years’ imprisonment to the death penalty.

PEN International considers Yang Hengjun’s detention to be a clear breach of his right to freedom of expression and calls for his immediate and unconditional release.

Ask the authorities to:

#YangHengjun’s detention is a breach of his right to freedom of expression. I call for his immediate and unconditional release #LiuXiaoboanniversary

President Xi Jinping – General Secretary of the Chinese Communist Party and President of the People’s Republic of China.

Ambassador CHEN Xu –Permanent Representative of the Permanent Mission of the People’s Republic of China to the United Nations Office in Geneva.

Ambassador ZHANG Jun – Permanent Representative of the Permanent Mission of the People’s Republic of China to the United Nations.

Tell others: share Yang Hengjun’s case and his work

We encourage PEN members to continue to:

Please let us know about your activities and actions. This helps us monitor the impact of our campaigning.

On the Liu Xiaobo Anniversary join @PEN_Int and call for the release of novelist, blogger and political commentator #YangHengjun. Detained. Charged with espionage. [insert link]

“knocking starts again, and I give in first. I climb up, pull the towel off the chair beside my bed and wrap it around my waist, opening the door with a bare chest. When I open the door I see Landlord Bo trying to jam the key in the hole with shaking hands. From the looks of it, he’s been trying for a while. Before I even have time to get angry, I see standing behind him two middle-aged men, one tall, one short. The old landlord backs off to one side, and the short, fat one of the two strangers flashes his ID in front of my face; before I have time to react, he says, “we’re the police. You are Yang Wenfeng, is that correct? 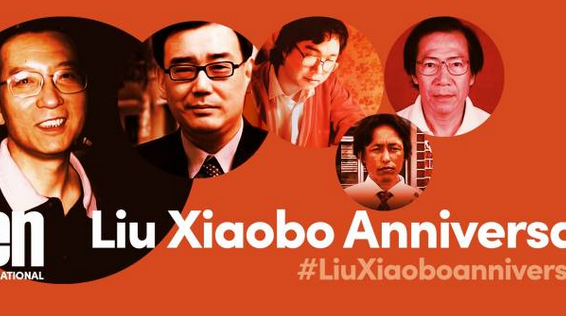 PEN International marks the ten-year anniversary of the awarding of the Nobel Peace Prize to deceased writer, literary critic and human rights activist Liu Xiaobo on 10 December 2010. The Liu Xiaobo Anniversary Campaign acts as a commemoration of Liu Xiaobo’s life, his contribution to Chinese literature, and his selfless work promoting basic freedoms in the People’s Republic of China (PRC).

The anniversary date coincides with Human Rights Day, which commemorates the adoption of the Universal Declaration of Human Rights by the United Nations General Assembly on 10 December 1948. The date also coincides with the publication of the Charter 08 Manifesto on 10 December 2008. This is a seminal document, co-authored by Liu Xiaobo and other Chinese activists, which calls for greater human rights and democratic freedoms in the PRC.

Liu Xiaobo had said he had no enemies, and indeed, he had none. The ideas he represented, that all people are equal, that they have the right to lead their lives as they wish, that individual liberty is the core of humanity, that we respect the dignity of each individual, became anathema for those in power in China. They jailed him for his words and ideas and only granted him medical parole when he had little time left. They tried to get the world to forget him; the world won’t, just as the world won’t forget the poets, writers, publishers, and intellectuals who continue to remain in jail in China, denied their freedoms and their platform. We will read their words, amplify their voices, and stare back at China, drawing inspiration from the man in front of the tank at Tiananmen Square, the Uyghurs in Chinese camps, the democracy activists on the streets of Hong Kong, as Charter 08 keeps reminding us. Salil Tripathi, Chair, PEN’s Writers in Prison Committee, Writer and Journalist.

What difference does the Liu Xiaobo Anniversary Campaign make?

Besides commemorating Liu Xiaobo, remembering his life and his enduring influence in the PRC, the campaign highlights the case of writers Gui Minhai, Kunchok Tsephel, Yang Hengjun and Qin Yongmin who are currently detained by the PRC government. For all featured writers, the campaign raises awareness of their situation, boosts advocacy work on their behalf and ensures that they and their families feel supported and not forgotten. Activities range from letter-writing to panel discussions, press conferences to publishing the work of imprisoned writers. PEN Centres and members worldwide take action to advocate for these cases throughout the campaign.

How can I take action for the Liu Xiaobo Anniversary Campaign?

More information is available at the link below: