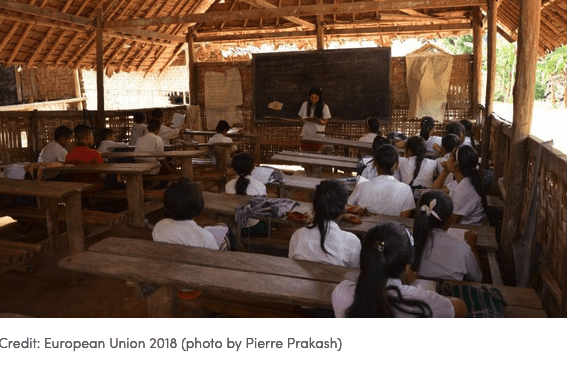 PEN International is concerned by the military junta’s recent amendments to Myanmar’s education system, which seek to promote the use of Burmese at the expense of other languages. In a country riven by conflict, these exclusionary amendments risk exacerbating ethnic divisions by infringing upon the linguistic rights of ethnic minority communities and increasing educational barriers for non-native Burmese speakers.

On 30 October 2022, amendments to Myanmar’s 2014 National Education Law (NEL) were published in the junta-controlled Myanmar Alin Daily, the country’s longest-running newspaper. The amendments, which came into force on 29 October, significantly weaken the linguistic rights of the country’s ethnic minority communities by promoting Burmese as the sole language of instruction in public education. In doing so, these discriminatory amendments will significantly disadvantage ethnic minority students by undermining their ability to learn using their mother tongue.

In response to the military junta’s amendments, Urtzi Urrutikoetxea, Chair of the PEN International’s Translation and Linguistic Rights Committee, said: ‘By undoing efforts to develop an inclusive education system that respects linguistic rights and reflects Myanmar’s rich multilingual heritage, the military junta will only further marginalise the country’s ethnic minority communities, deepening the divisions that have been a key source of the country’s entrenched ethnic conflicts.’

Myanmar is a country of rich linguistic diversity, which is reflected in the over 100 different languages and dialects spoken across the country. Burmese is the official language of Myanmar and is the primary language used by the Bamar, the country’s largest ethnic group. Burmese also serves as a lingua franca for many of the country’s ethnic minority communities.

During previous decades of repressive military rule (1962-2011), the promotion of a majoritarian national identity that elevated Burmese at the expense of other languages resulted in the marginalisation and suppression of the use of ethnic minority languages in public life. The military’s failure to embrace the country’s ethnic diversity has been a central grievance of non-Bamar ethnic communities, exacerbating the divisions that have fuelled the country’s protracted cycle of conflict.

Following the end of formal military rule in 2011, the enactment of the 2014 NEL, and its 2015 amendments, was a significant milestone in the development of a more inclusive national education system that better catered to the needs of Myanmar’s diverse ethnolinguistic groups. The 2014-2015 NEL included provisions which stated that ethnic minority languages could be used alongside Burmese as a classroom language (Article 43[B]) and that regional and state governments could implement the teaching of ethnic minority languages and literatures at the primary level and eventually higher grades (Article 44).

While the development of the NEL proved controversial, resulting in protests from student unions and a violent crackdown by the police, it was the first time that non-dominant ethnic language teaching was formally recognised by law in Myanmar, representing a positive step towards the integration of ethnic minority languages into the national education curriculum.

PEN International urges the military junta to annul these amendments and to ensure that Myanmar’s education system supports the linguistic rights of non-Burmese speakers and respects the country’s rich linguistic diversity.

We also continue our ongoing call for the release of all those unjustly detained for their peaceful expression. For more on our work on Myanmar, click here.