“… in my imagination, I am eyeball to eyeball with each of you…” – Nedim’s letter to PEN Melbourne 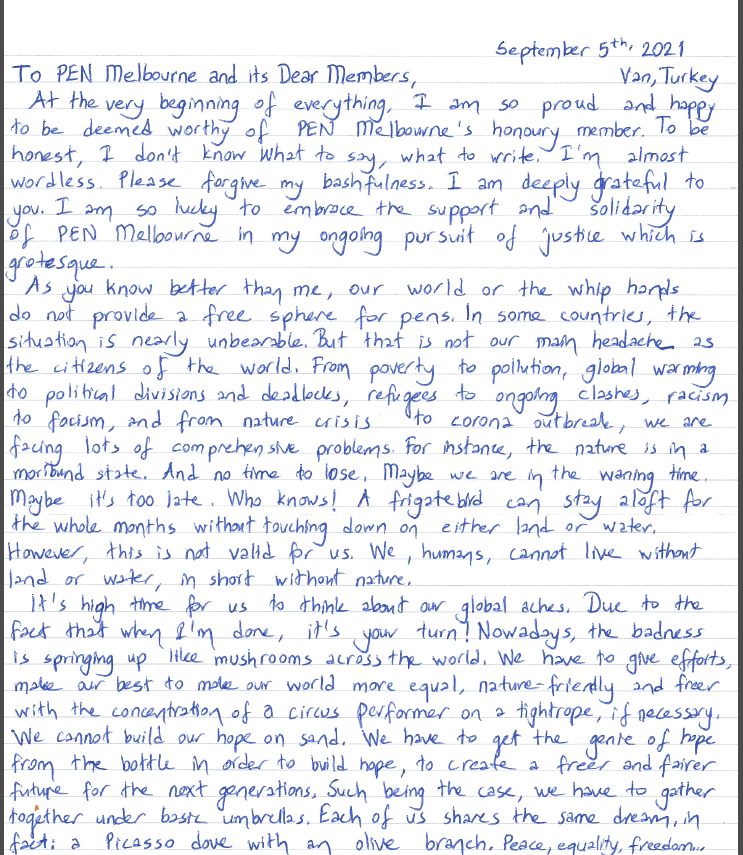 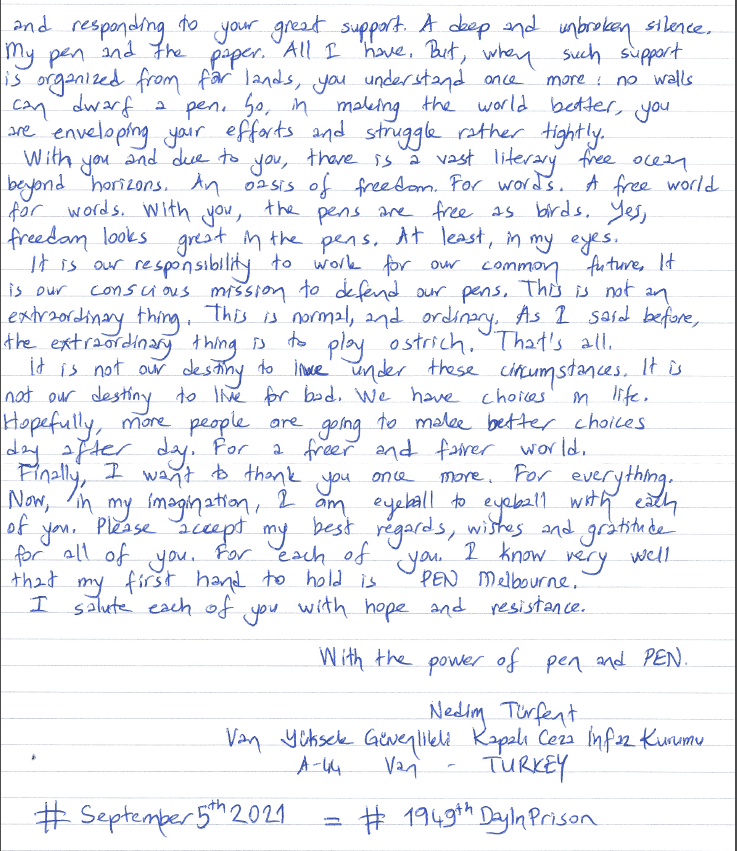 Nedim’s letter as a pdf: 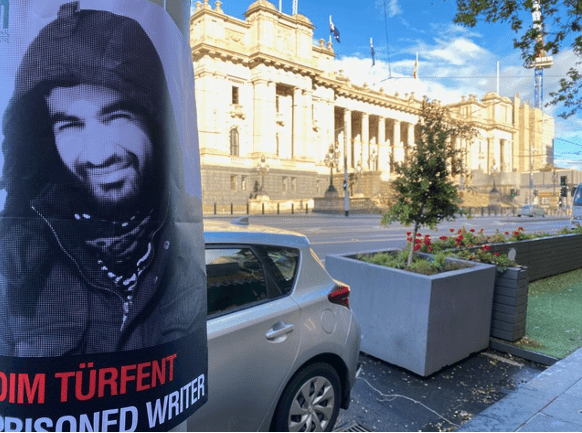 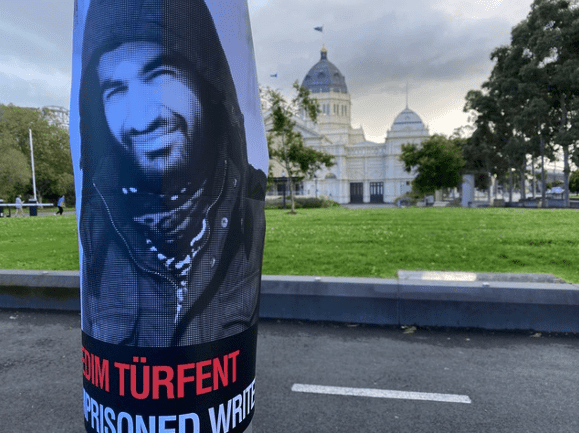 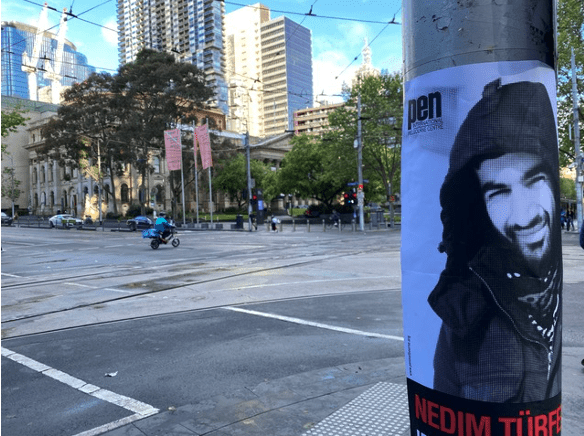 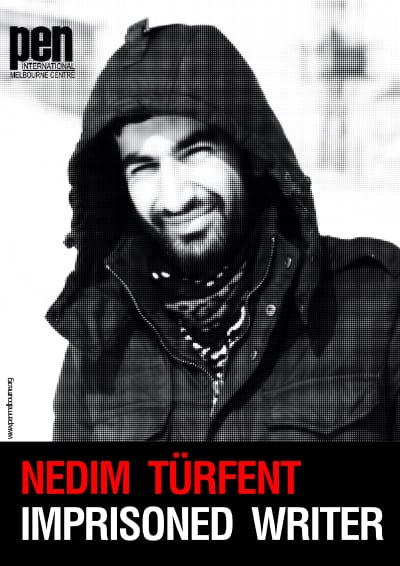 Nedim Türfent is a Kurdish journalist and poet. He was imprisoned in 2016 after publicising police harassment of workers in south-east Turkey.

In January 2020 Nedim Türfent wrote his first card to us. We were moved by his compassion and concern about the bushfires at that time: ‘I’m so sorry about [the] massive forest fires in Australia. Please feel my aching heart. Thank you for your letters. We are at one-heart’.

Later that year, PEN Melbourne members wrote cards to him during our annual card-writing gathering. As I wrote, I reflected on his circumstances. He had been in imprisoned since the age of 26 and the first two years were in solitary confinement. I have children of the same age. I thought of them. The pain of imagining them, like Nedim, being treated with such cruelty and disregard was unbearable. I told him that we knew of his circumstances, and were committed to working for his freedom.

Nedim replied personally to everyone who wrote to him. We were touched and challenged by this response, and made the commitment to invite Nedim to be a PEN Melbourne Honorary Member. Nedim has accepted our invitation. This means that PEN Melbourne will work purposefully and with many others, for his release. We will also help amplify awareness of his writings. Whilst in prison he has written a collection of poetry in Turkish, Kuş Aynası. Imagine the small mirror that people with budgerigars put in the cage for the birds’ own self-entertainment.

‘The Soul and the Beast,’ published here, has been translated from Nedim’s collection by Turkish-Australian poet, Hidayet Ceylan. Full details, including the original text in Turkish, are available at penmelbourne.org. It has been a complex process of dialogue about the translation, as we discuss the meanings and interpretations, without the presence and affirmation of the poet himself. Please read the poem, find out about Nedim’s circumstances, join our work for Nedim, and write to him in solidarity.

“We are our own devils; we are expelling ourselves from our heaven”

Do not leave Nedim without a letter and without a greeting!

The poem is available as a broadsheet pdf here:

Words fly by in my head. Meanwhile, I can barely put two syllables together. My pen has been becalmed for hours. The ink no longer flows, as if my pen had been weaned . . .

I must tell you frankly that had I been told five years ago, ‘you will be held in prison for years, for having practiced alternative journalism,’ I would have moved along and laughed in your face. Never would I have imagined that the Law and our rights could be trampled this badly. Like a shuttle constantly moving backward and forward between acceptance and habituation, we are transformed into this object weaving the net we thought impossible, undoable. And that is the worst of it. Today we accept silently, as if they were ordinary, all these things that, no more than five years ago, would have set fire to the greatest of indignations. We collapse in our armchairs, settle into our echo chambers, and we wish a long life to the snake that does not strike us . . .

This pencil is one of the stories on which the vice of persecution tested its teeth. In 2015 in Y¸ksekova, a town smack on the borders of Iraq, Iran, and Turkey, Turkish special forces made a group of Kurdish construction workers lie naked on the ground and shouted, ‘You will see the strength of the Turk!’ I relayed this infamy and an inquiry was opened against these policemen. But shortly thereafter, the voice of revenge reached my ears. Attacks using tear gas, rubber bullets, surveillance, aggressions, death threats, then arrest, torture during custody and, finally, on 13 May 2016, incarceration. . . All of the 19 witnesses for the prosecution described torture while in custody . . . one of the witnesses declared: ‘the policemen told me: if you don’t sign this document, we will pull out your teeth with pliers.’

Please, consider this open letter as ‘representative’ of situations. In this framework, justice is demanded for all. In solidarity and with the pencil’s resistance, before its lead is broken.

PEN Melbourne is proud to have Nedim Türfent as our Honorary Member.

We have recently received confirmation from Nedim from his prison in Van, Turkey, and through the broader PEN International network, that he welcomes his membership to PEN Melbourne.

Nedim is a journalist, editor and poet.

He was detained in May 2016 after reporting on Turkish special forces’ ill-treatment of Turkish and Kurdish workers, in south-east Turkey. He published footage of this treatment and immediately began receiving death threats from the police and became the target of online harassment. He was detained in solitary confinement. He was 26 years old. Ten months later he was formally charged with ‘membership of a terrorist organisation’.

In his trial beginning in June 2017, he was denied the right to appear in court physically.  However, 19 of the 20 prosecution witnesses retracted their statements, saying they had been extracted under torture. In December, 2017 he was sentenced to eight years and nine months in prison. This verdict has been upheld twice. But Nedim’s lawyers have appealed further.

While waiting for his appeal, Nedim has been studying, English, German and writing poetry.

He is also a generous writer of letters. During PEN Melbourne’s end- of- year card writing to imprisoned writers in December 2020, many members wrote to Nedim. He has since written cards in return to each writer, in gratitude, and with powerful messages that affirm ‘freedom for words’.

If you would like to join PEN Melbourne’s actions in solidarity with Nedim, please contact us at wip@penmelbourne.org

One of Nedim’s first poems translated into many languages

Your heart has become the earth
let it give elixir into the veins
bring fertility to the soil
from the springs behind the mountain Qaf.
let the benevolence of the crops
be the silver key to life.
let your heart soothe
the farmer
the peasant
the day laborer
the distressed

let it massage the broken wings of birds
with ointments
let it grant refuge
to the ants, working collectively, in solidarity
let heart fill with generosity
giving butterflies an extra day of life
let it be a lifeline
like the womb

let your heart be crystal clear
as clear as water
let it give life to the lifeless.

PEN Melbourne has nominated imprisoned Kurdish writer Nedim Türfent as an Honorary Member, and we are pleased that Nedim has accepted.

Nedim Türfent is a journalist and poet currently imprisoned in Turkey. In December 2017, more than 18 months after his arrest, Türfent was handed an eight-year-and-nine-month prison sentence on trumped-up terrorism charges. He has now spent more than 1,500 days in detention.  Naming Nedim as an honorary member means that PEN Melbourne will energetically prosecute his case and continue our correspondence with him.

If you would like to join our work with Nedim Türfent please contact our Writers in Prison Team.

PEN Melbourne members have written to Nedim on several occasions since his arrest, and we have received spirited and enthusiastic replies written from his prison cell. Here is a letter we received earlier this year. 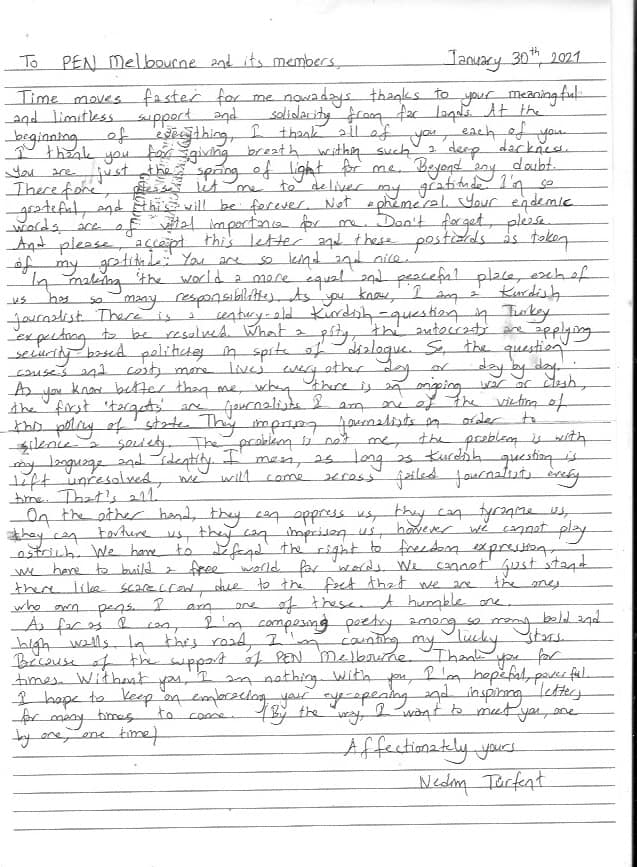 WRITE to Selahattin Demirtaş, a writer in prison 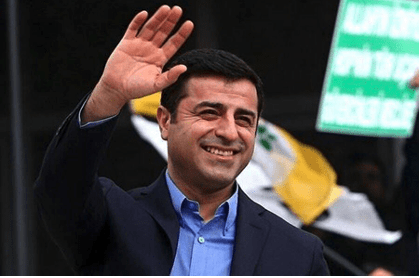 Throughout the year PEN Melbourne members and friends write to persecuted writers in prison around the world.

We send our best wishes, and our hopes that they are staying well and in good spirits.

We do this in the spirit of solidarity and to let them know that they are not alone and not forgotten.

We try by this means to allow a light into their lives in prison.

The letters are not political, but a gesture of friendship and a way of connecting across the cultural divides.

Writer and opposition politician Selahattin Demirtaş turned 48 on Saturday 10 April – the fifth birthday he has spent behind bars and away from his loved ones.

Demirtaş has been held in pre-trial detention for over four years, on dubious terrorism charges. The European Court of Human Rights twice ruled for his release, to no avail.

It is time that Turkey abides by its obligations under international law and release Demirtaş once and for all.

Former co-chair of the pro-Kurdish Peoples’ Democratic Party (HDP), Selahattin Demirtaş was arrested on 4 November 2016 on dubious terrorism charges. The Turkish authorities have so far failed to implement a landmark ruling of the European Court of Human Rights issued in November 2018, which found his detention to be politically motivated and ordered his immediate release – a call reiterated by the Court’s Grand Chamber in December 2020.

PEN International calls for his immediate and unconditional release.

Please send messages of solidarity to: