In Memory of Judith Rodriguez 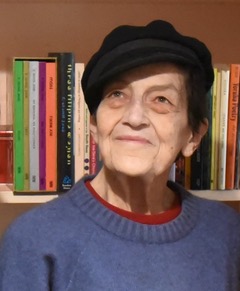 In the wake of the death of Judith Rodriguez on November 22 thoughts of her have been circling in my mind. The following lines from her Nu-Plastik Fanfare Red, a poem from 1973 are Judith to me – her indomitable spirit, her wit and humour, her staunch political commitment:

I am painting my room red.

this mix is right for pottery.

that red-figure vases are.

Even thus shyly to surface:

up we go red, flag-balloon,

We remember Judith as a poet, an artist, a teacher and a publisher, a generous woman who travelled widely reading her poetry and teaching and especially supporting emerging writers. Since the sixties Judith had taught at universities on several continents.

A passionate defender of human rights for decades Judith inspired and led in many roles in PEN International. She joined PEN Melbourne in 1984 where she served as President and then vice-president for fifteen years and represented PEN Melbourne at Congress most years from 1995. Judith was elected a Member-at-Large of the PEN International Board 2001-2004, 2004-2006; a member of the Search Committee from 2006, and its Chair 2008-2009, re-elected and Chair 2009-2012. In 2017 she was elected an International Vice-President of PEN. Judith was dedicated to the work of the Translation and Linguistic Rights Committee and translation held a special place in her heart.

Judith published numerous volumes of poetry, some illustrated with her own linocuts. Her latest volume The Feather Boy recently launched by her dear friend David Malouf in Sydney, has Judith’s art work on the cover. From 1979 to 1982, she was poetry editor for the literary journal Meanjin, and from 1988 to 1997 she was Poetry Editor with Penguin Australia and is remembered for publishing new poets.

In 1994 she was made a Member of the Order of Australia, for services to literature, and she is also a recipient of the FAW Christopher Brennan Award. Her poetry collection Mudcrab at Gambaro’s (1980) received the PEN International prize for poetry. Who’s Who in Contemporary Women’s Writing, comments: ‘Her poetry constructs strong female voices which insist on justice, clearly perceiving the intricacies of the personal and the relational. They are not confessional, but draw deeply on experience.’

I recall Judith sitting around our table at her last PEN Melbourne committee meeting. Judith with a glass of wine in hand, listening, thinking, head nodding, and then her forthright and clear eyed responses that drew on her deep knowledge and with her sharp political understandings in play.

Judith Rodriguez: always the humane activist, always warm hearted and wise, quick to pinpoint the farcical and call-out the false.