Nigeria: journalists detained as authorities clampdown on freedom of expression 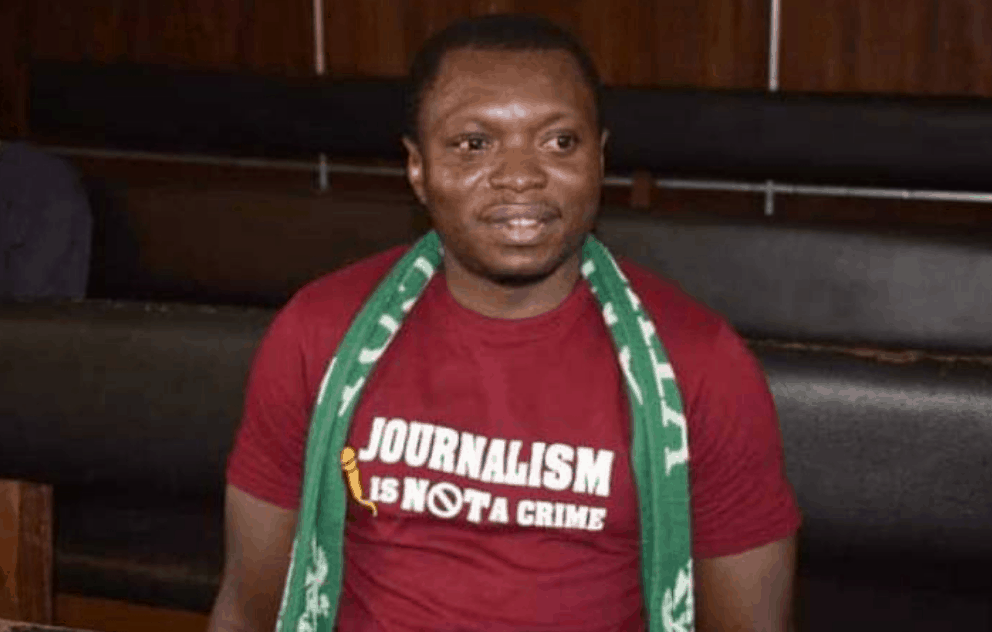 It is clear that the right to freedom of expression is increasingly under threat in Nigeria, PEN International said today, amid reports of the arrest and detention of journalists in the country. The organisation calls on the Nigerian authorities to uphold the right to freedom of expression, enshrined in the Nigerian constitution, by releasing journalists detained for peacefully expressing themselves via their work or activism, and allowing journalists to carry out their work free from interference.

One example of the shrinking space for freedom of expression in Nigeria is the detention of journalist and activist Agba Jalingo, publisher of the online news site CrossRiverWatch. Jalingo was arrested on 22 August in Lagos in relation to an article and associated social media posts he had written in July 2019, detailing allegations of corruption by the state governor of Cross River state. Jalingo was originally charged in August with treason, terrorism and publishing false information, but the charges were later amended in October, according to a charge sheet viewed by PEN International. Jalingo now faces three charges under the Terrorism Act and one under the Cybercrimes Act. The terrorism charges are based on Jalingo’s alleged involvement with Omoyele Sowore in a protest movement in Nigeria (see below). If found guilty, Jalingo could face a life sentence in prison or the death penalty. He has been denied bail twice, and remains in detention in Calabar prison, in southern Nigeria. PEN also has serious concerns that Jalingo will not be granted a fair trial, as the Federal High court has allowed witnesses to be masked and the trial to be held in secret.

‘The detention of journalists, such as Agba Jalingo, for what they have written is a worrying indication of the Nigerian authorities’ increasing intolerance of those who criticise the government or raise difficult questions about matters of public interest,’ said Salil Tripathi, Chair of PEN’s Writers in Prison Committee. ‘It is absurd that the authorities are prosecuting him; they should instead investigate the allegations he has raised and promptly release him without charge.’

As well as Jalingo, Omoyele Sowore, a high-profile journalist and publisher of the online news website Sahara Reporters, and a human rights and opposition activist, remains in detention in Abuja, the capital of Nigeria, despite a court order to release him and having met his bail conditions. His detention and the charges against him of treason, money laundering, and cyber-stalking the President, appear to be in response to his organisation of a peaceful protest movement calling for good governance, known under the name of #RevolutionNow. Sowore has been held by the Department of Security Services (DSS) since 3 August 2019. After his arrest, he was detained for a renewable 45-day period under the Terrorism Act, in order for the authorities to carry out further investigations. The DSS has so far refused to release him on bail, despite two court orders to do so – the DSS have ignored a September court order ruling that he should be released pending his trial, and failed to comply with a November court order calling for his release once he had met his bail conditions. On 12 November, journalists covering protests by activists calling for Sowore’s release outside the DSS headquarters in Abuja, as well as the protestors themselves, were reportedly harassed and attacked by DSS officials.

According to the Committee to Protect Journalists, journalists have also been assaulted while covering protests and elections in other parts of the country over the past few months.

In addition, several other journalists, bloggers and writers are facing restrictions on their right to freedom of expression through legal proceedings, arrests and detentions. PEN International is seeking more information on these cases. PEN Nigeria released a statement on 15 November, PEN International’s Day of the Imprisoned Writer, drawing attention to the worrying situation facing writers and journalists in the country. PEN Nigeria stated:

“These instances of violation of the freedom of expression of Nigerian writers, journalists and bloggers, at the behest of agents of the state, call for great concern. In a democratic dispensation such as Nigeria purports to be, one of the pillars is freedom of expression…As a body of writers, we are concerned about the implications for the Nigerian people of these systematic acts of repression. We believe that such censorship of the people bodes ill for the continuing healthy evolution of this entity called Nigeria. We therefore wish to condemn in the strongest terms these acts of violation of the right to liberty of the afore-named persons, as well as others facing a similar fate.”

The Cybercrime (Prohibition and Prevention) Act of 2015 and the Terrorism Prevention Amendment Act of 2013 have been criticised for being overly broad and have been used to silence critical voices. Other proposed legislative measures raise concerns that they will be used to restrict freedom of expression, including a bill to regulate social media, which passed a second reading in Nigeria’s Senate on 20 November. A hate speech bill was reintroduced before the Senate on 12 November and initially proposed the death penalty as a possible punishment; reports indicate that the bill will be amended to remove this provision.

PEN International calls on the Nigerian authorities to uphold their obligations to protect freedom of expression by releasing journalists detained for their work or otherwise arbitrarily detained, ensuring that journalists can safely practice their profession without fear of repercussions, and amending or repealing legislation to ensure it is in line with international human rights standards.