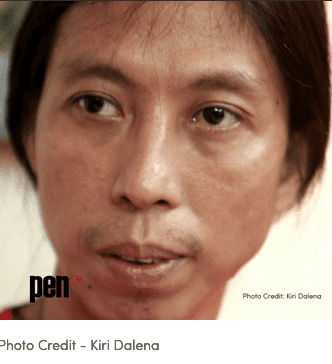 PEN International and PEN Philippines are outraged at the killing of poet, musician and activist, Ericson Acosta, and call for an urgent and transparent investigation into the circumstances surrounding his death.

On 30 November 2022, Acosta was reportedly killed during a military operation in Kabankalan, located in the province of Negros Occidental in the Philippines. The Philippine Army claimed that two bodies were found following a clash with armed communist rebels. While the military did not initially identify those deceased, the National Democratic Front Negros (NDF-N), a political umbrella group, identified one of the deceased as Ericson Acosta, claiming that he was their consultant.

The contested claims around the circumstances of Acosta’s death raise significant concerns surrounding potential violations of international humanitarian law, which prohibits the summary killing of civilians in custody or captured combatants. Following news of the killings, religious leaders and human rights groups have called for an investigation.

On the basis of the Philippine government’s international and constitutional human rights obligations, PEN International and PEN Philippines call for an urgent and transparent investigation into the circumstances surrounding Acosta’s death.

Ericson Acosta lived as a poet, journalist, musician, and activist. A former entertainment editor for the Manila Times, Acosta was also heavily involved in theatre, having directed several plays, including “Monumento”, which he also wrote. He was also a dedicated environmental activist who carried out research in support of farmers facing land seizures and other issues affecting their livelihoods.

In February 2011, Acosta was detained while carrying out field research on suspicion of being a member of the New People’s Army and was later charged with illegal possession of explosives. He was imprisoned for almost two years until the Department of Justice dismissed the case against him in January 2013, stating that the charges against him were baseless. During his detention, PEN International and PEN Centres around the world campaigned for his release.

While he was imprisoned, Acosta maintained a prison diary called the “Jailhouse Blog” containing poems, essays and sketches detailing his time in detention. He also continued to write songs, with over three volumes of music recorded during his detention and published online as “The Prison Sessions”.

Following his release, Acosta published a collection of his poetry, titled “Mula Tarima Hanggang at iba pang mga Tula at Awit”, which focuses on the struggle for social justice in the Philippines. In 2016, his poetry collection was awarded the “Best Book of Poetry in Filipino” at the 35th Philippine National Book Awards.