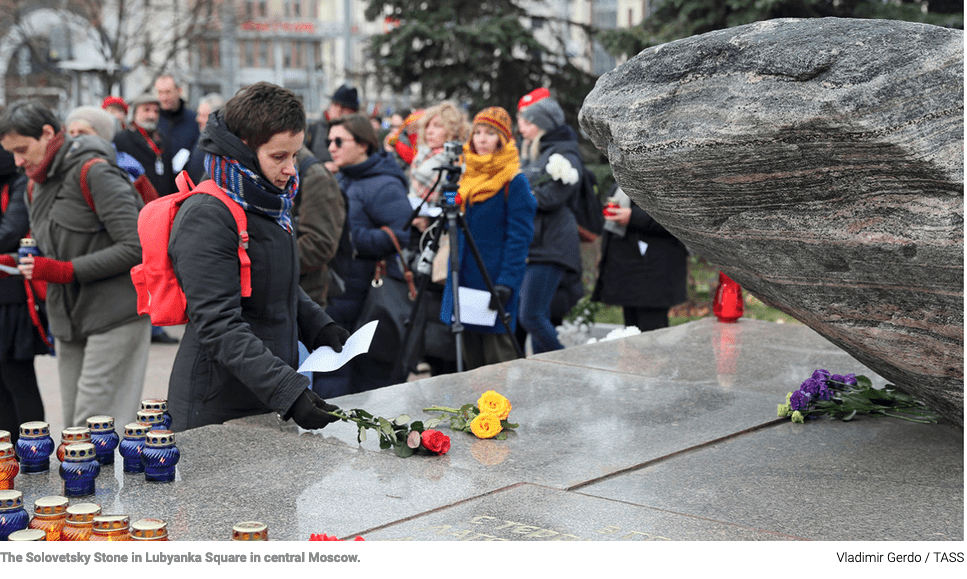 16 November 2021 – PEN International, PEN Moscow and St Petersburg PEN condemn the Russian authorities’ move to shut down Memorial International Society and its sister organisation Memorial Human Rights Centre, which are amongst the oldest and most prominent rights organisations in Russia. PEN urges the authorities to immediately drop the lawsuits against Memorial, and to end their relentless crackdown on freedom of expression and association, including by repealing the ‘Foreign Agents’ law.

On 11 November, Memorial International Society said it had been notified by the Supreme Court that prosecutors had demanded its liquidation over repeated violations of the ‘Foreign Agents’ law – particularly the failure to mark their ‘foreign agent’ status on all their publications. The case will be heard on 25 November. On 12 November, Memorial Human Rights Centre was informed by the Moscow City Court that the Moscow City Prosecutor’s Office had filed a similar lawsuit against them. A date for the court hearing has yet to be set.

‘The Russian authorities have been labelling dissenting voices as foreign agents for years. Their attempt to shut down Memorial International Society and Memorial Human Rights Centre, two of the most respected rights organisations in the country, is an assault on independent civil society. Today, we stand with Memorial and its fearless activists. We urge the authorities to immediately drop the lawsuits and to repeal laws stifling free expression and association, including the ‘Foreign Agents’ law’, said Ma Thida, Chair of PEN International’s Writers in Prison Committee.

‘Shutting down Memorial would make advocating for human rights in Russia even more challenging, but for Russian society as a whole and millions of relatives of the victims of Stalin’s Great Terror, it would also amount to justifying the past, entrenching today’s repression and the eradication of memory’, saidNadezda Azhgikhina, Executive Director of PEN Moscow.

‘Memorial’s work and fate are crucial for Russia and beyond. Human rights, dignity and history belong to us all. Our joint memory should remain alive, and tragedies of the past never repeated. We call for international solidarity and urge the Russian authorities to preserve Memorial’s vital mission’, addedElena Chizhova, Board Member of St Petersburg PEN.

Memorial was established in Russia in 1988 as an organisation focusing on political repression in Soviet and post-Soviet Russia, legal and moral rehabilitation for its victims, and justice for all. Nobel Peace Prize winner Andrey Sakharov was one of Memorial founders. Memorial has two key entities – International Memorial Society and Memorial Human Rights Centre.

Although local authorities attended events in Memorial’s early years, attitudes started to change, with the Russian authorities glorifying the Soviet past after Vladimir Putin stated in 2017 that the ‘excessive demonisation of Stalin is one of the ways to attack the Soviet Union’. The Russian authorities haverepeatedly targeted Memorial in recent years. The International Memorial Society has been labelled a ‘foreign agent’ since 2014.

The 2012 ‘Foreign Agents’ law places onerous restrictions on NGOs receiving funds from abroad, while the 2015 law on ‘Undesirable Organisations’, which allows any foreign or international NGO to be banned from operating in Russia, further adversely impacts the operating environment. The ‘Foreign Agents’ law was subsequently expanded to include media outlets and individual bloggers that receive any amount of funding from foreign sources. PEN International, PEN Moscow and St Petersburg PEN have repeatedly called for the law to be repealed.