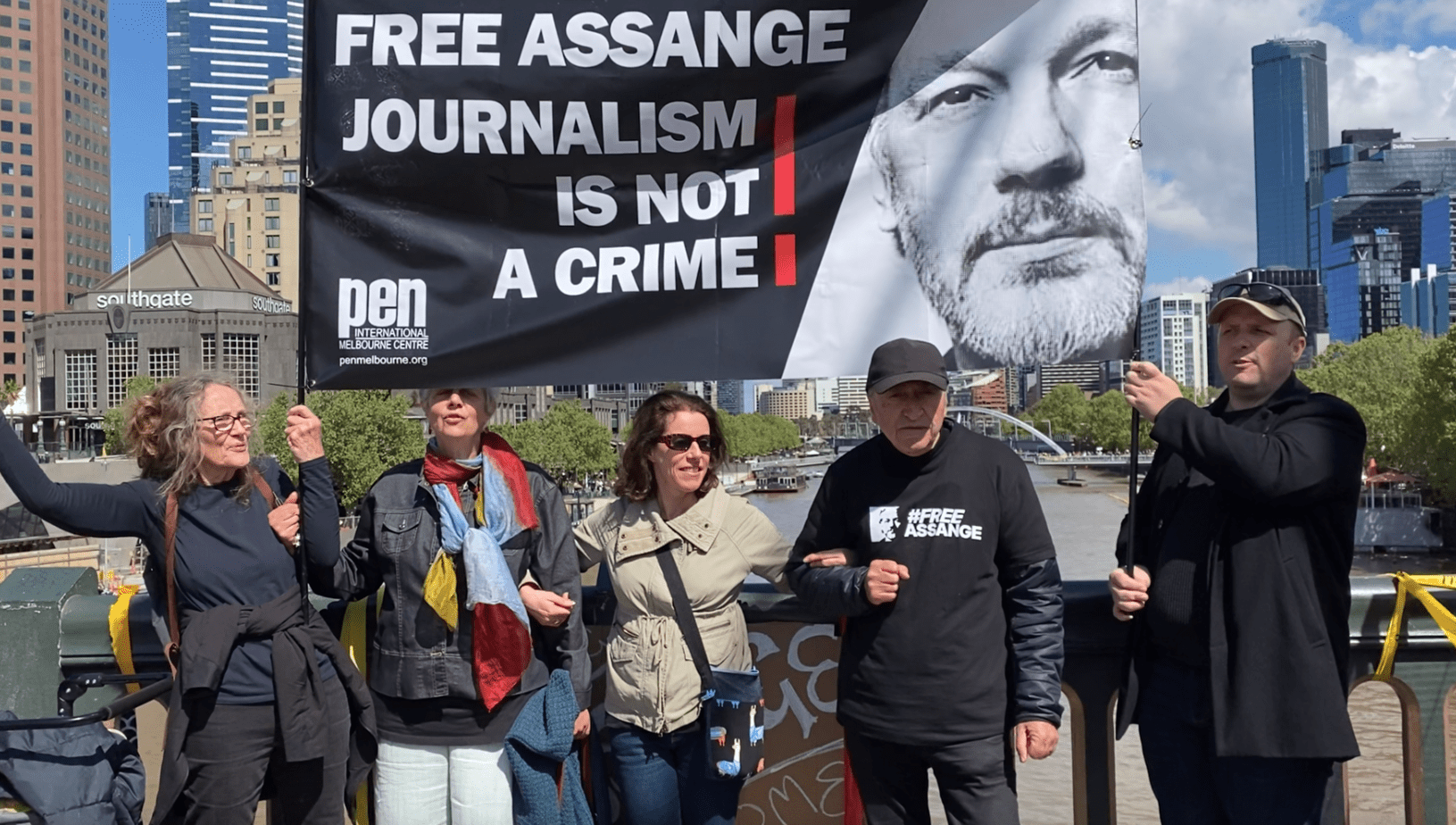 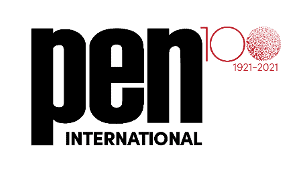 PEN International expresses serious concern over the continued prosecution in the US of Wikileaks founder and publisher Julian Assange and condemns the decision of the UK Home Secretary to certify his extradition, setting a dangerous precedent for journalists and publishers around the world. Assange faces up to 175 years in prison for his role in obtaining and publishing classified military and diplomatic documents in 2010.[i]

PEN International has repeatedly stressed that Julian Assange’s prosecution raises profound concerns about freedom of the press.[ii] Invoking the Espionage Act for practices that include receiving and publishing classified information sends a dangerous signal to journalists and publishers worldwide. The State’s desire to keep a matter secret does not automatically override the public’s right to know, particularly where there is strong evidence of human rights violations or corruption. In its War Logs, comprising hundreds of thousands of US documents about Afghanistan and the war in Iraq, WikiLeaks disclosed material detailing human rights abuses by the US army under the Bush administration, including a classified US military video showing a 2007 attack by Apache helicopters that killed a dozen people in Baghdad, with two Reuters news staff amongst them. [iii]

Assange is the first publisher to be charged under the Espionage Act. Dunja Mijatović, the Council of Europe Commissioner for Human Rights, said that allowing his extradition ‘would have a chilling effect on media freedom, and could ultimately hamper the press in performing its task as purveyor of information and public watchdog in democratic societies’.[iv] Nils Melzer, former Special Rapporteur on Torture and Other Cruel, Inhuman or Degrading Treatment or Punishment, described the US indictment against Assange as ‘the criminalisation of investigative journalism’. PEN International echoes the former Special Rapporteur’s concerns over Assange’s health, which has severely deteriorated as a result of being confined in Belmarsh maximum-security prison in London since April 2019. [v]

On 17 June 2022, the UK Home Secretary approved the extradition of Julian Assange, triggering a wave of condemnation from human rights and free expression groups worldwide. His legal team continues to fight against his extradition and has lodged an appeal at the UK High Court.

At its 85th World Congress in Manila, Philippines, the PEN community condemned the charges against Julian Assange and the threats they pose to press freedom.[vi] Considering his continued prosecution in the US and the UK Home Secretary’s decision to certify his extradition, the Assembly of Delegates of PEN International calls on the United States to:

The Assembly of Delegates of PEN International calls on the United Kingdom to:

[iv] Council of Europe, Commissioner calls on UK government not to extradite Julian Assange, 18 May 2022, available at: https://www.coe.int/en/web/commissioner/-/commissioner-calls-on-uk-government-not-to-extradite-julian-assange

[vi] PEN International, Resolution on the abuse of the US espionage and the US prosecution of Julian Assange as an attack on freedom of expression, October 2019, available at: https://pen-international.org/app/uploads/RESOLUTION-ON-THE-ABUSE-OF-THE-US-ESPIONAGE-AND-THE-US-PROSECUTION-OF-JULIAN-ASSANGE-AS-AN-ATTACK-ON-FREEDOM-OF-EXPRESSION.pdf 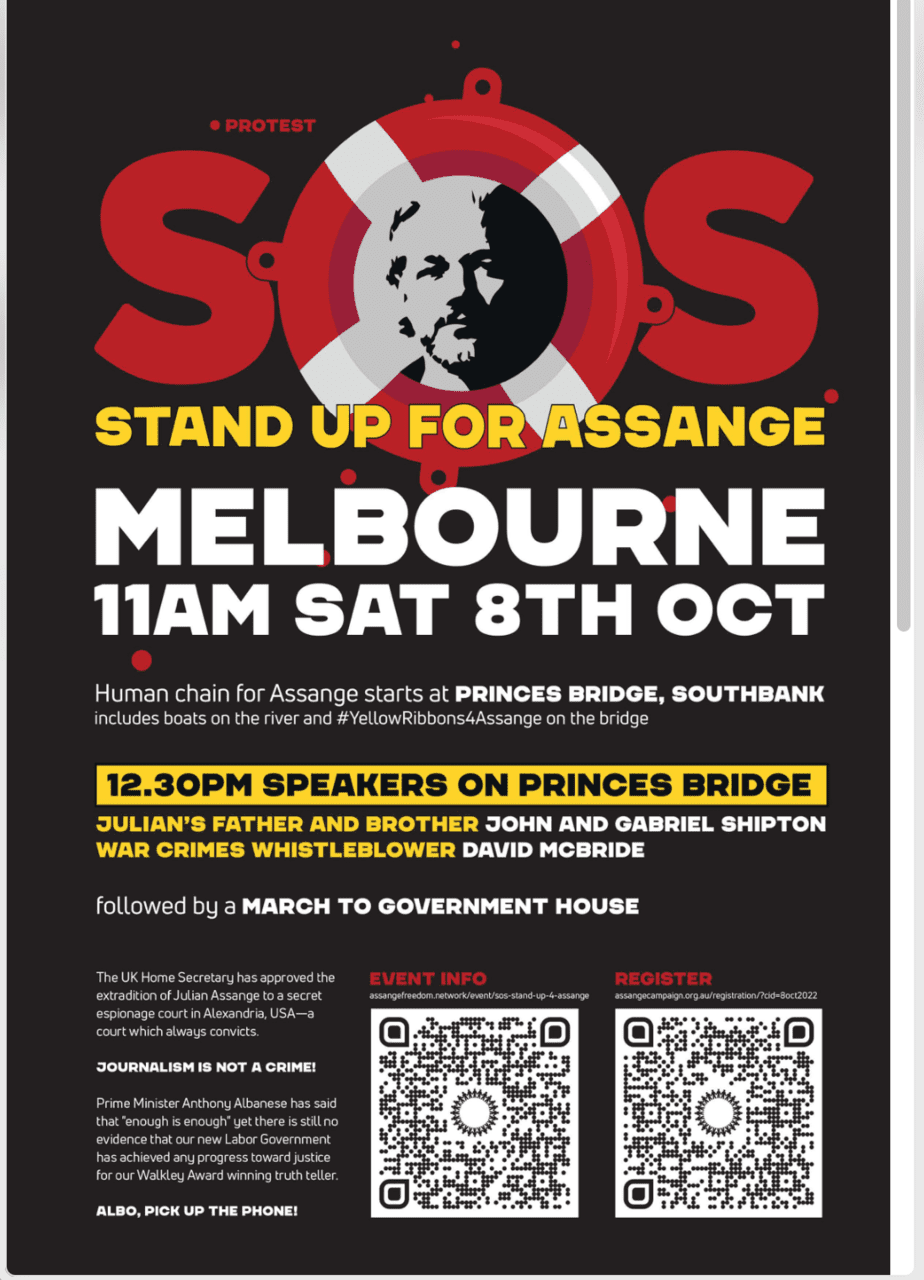 Photos from the SOS Human Chain in Melbourne on the 8th October, 2022 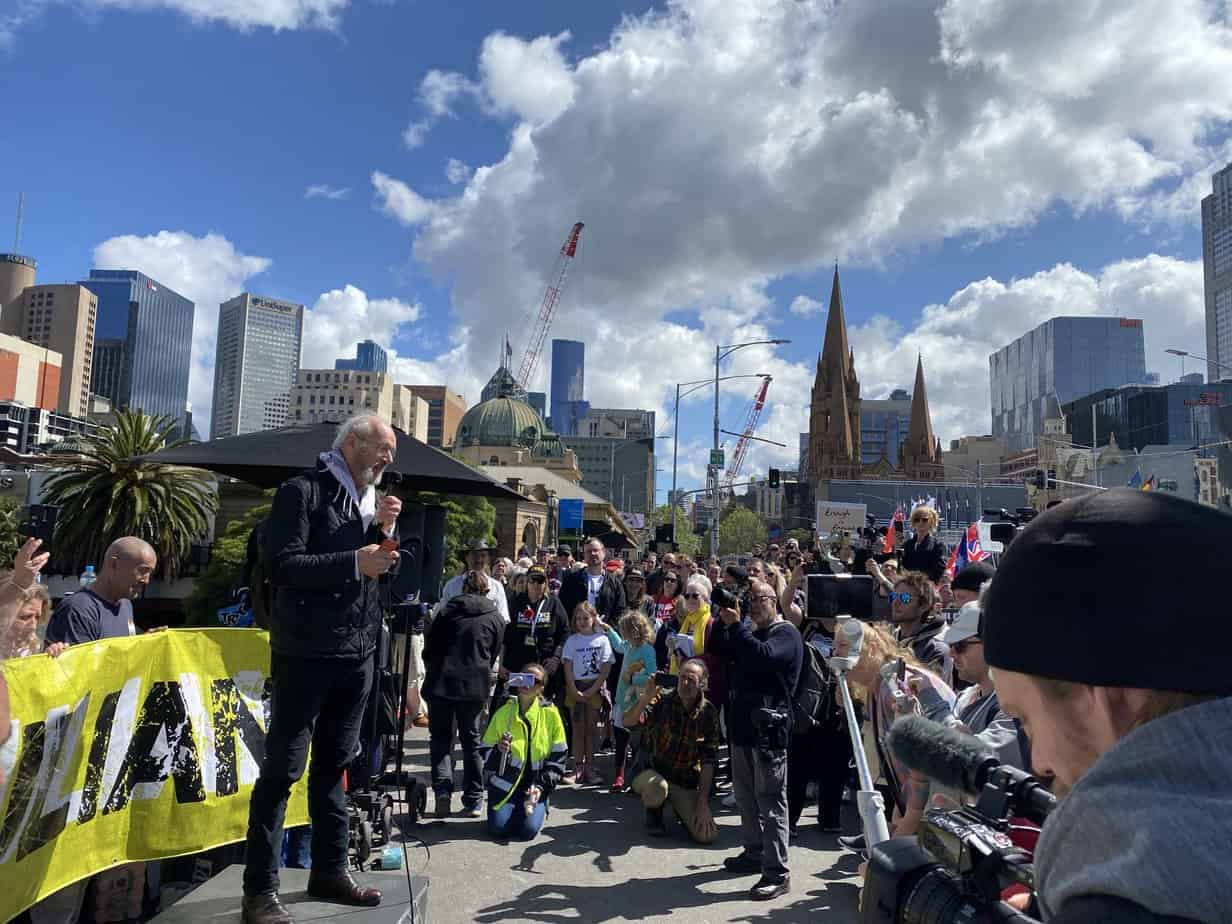 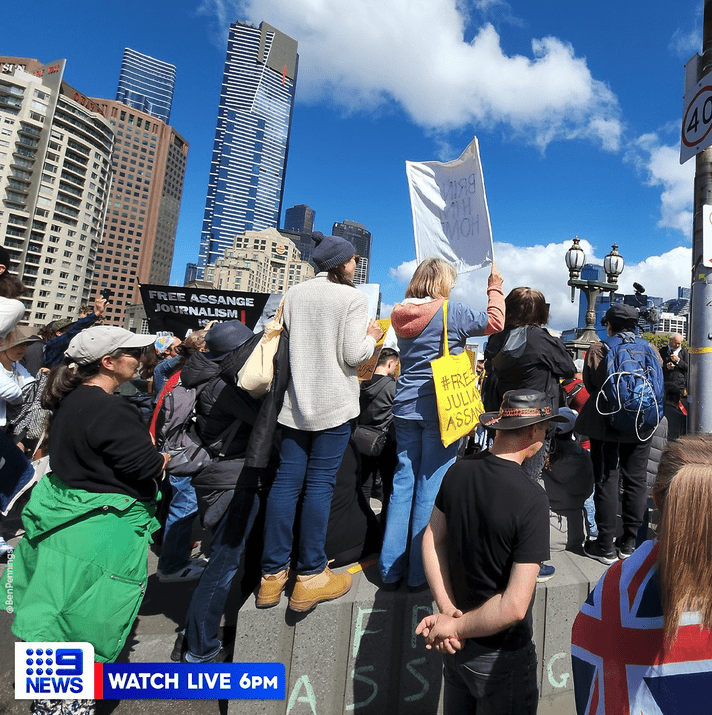 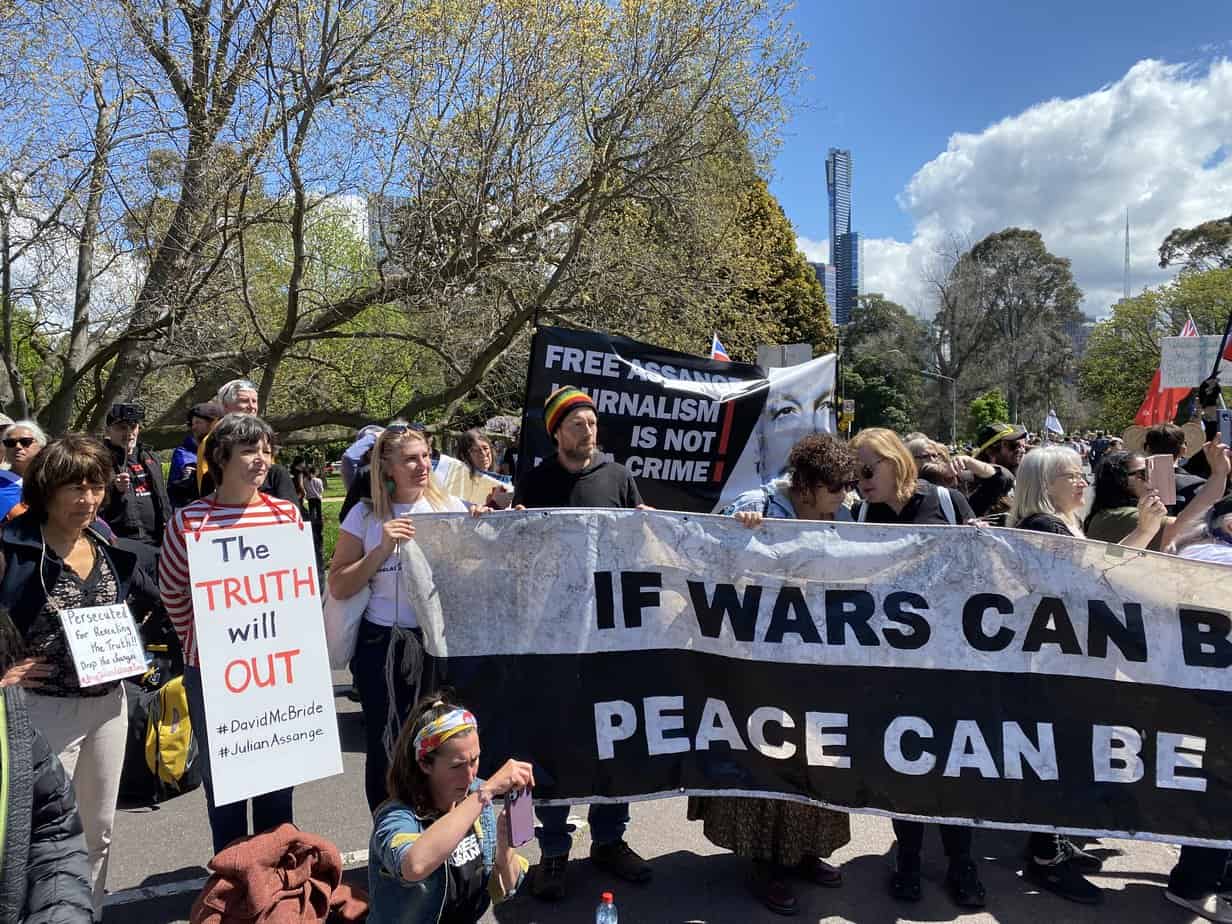 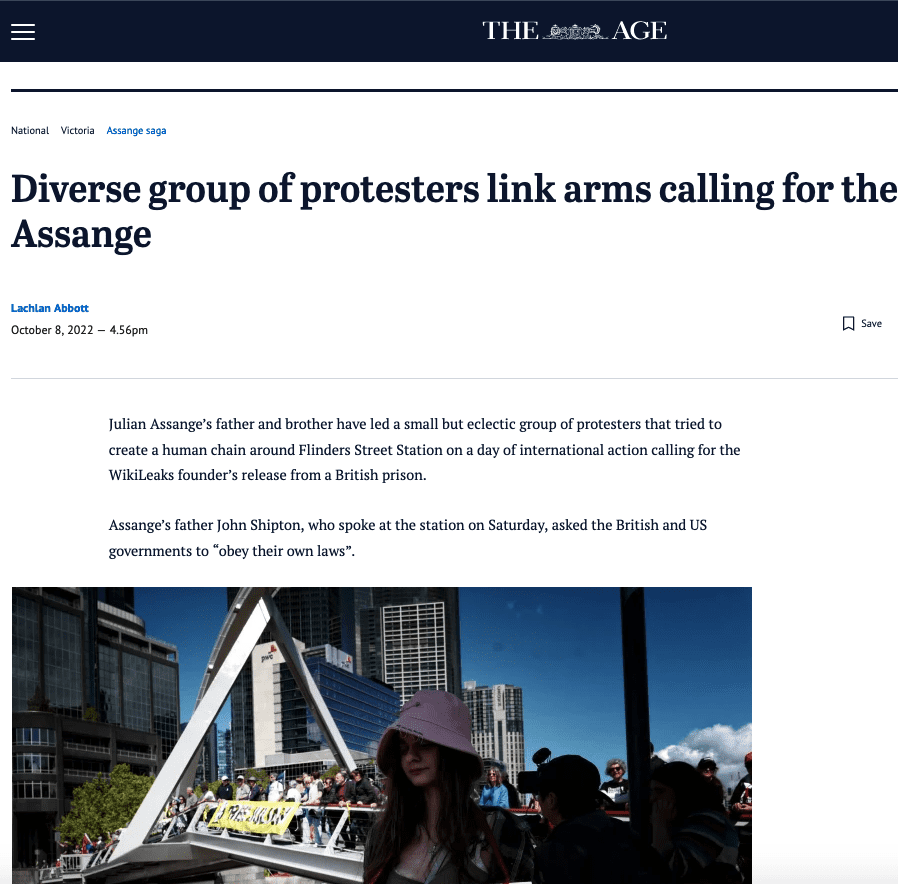 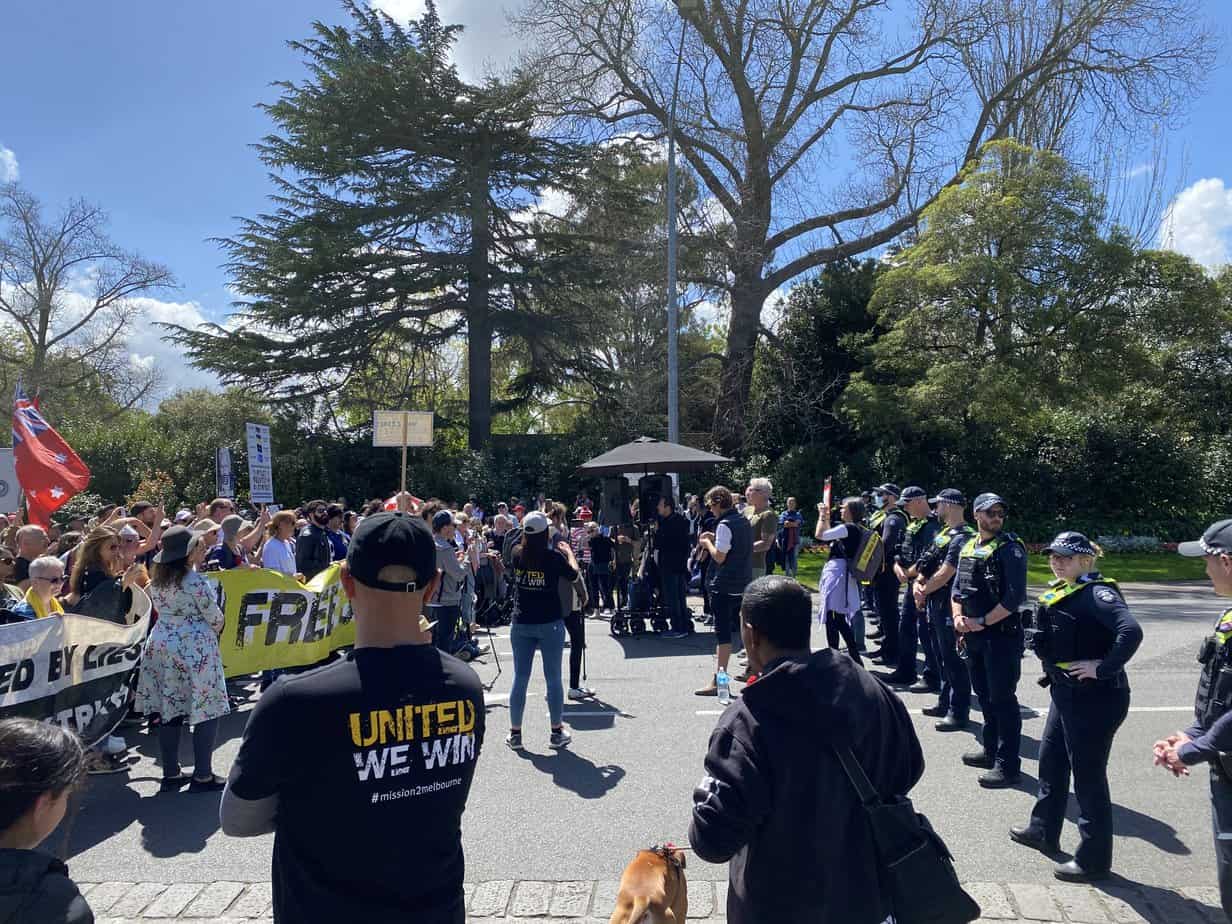 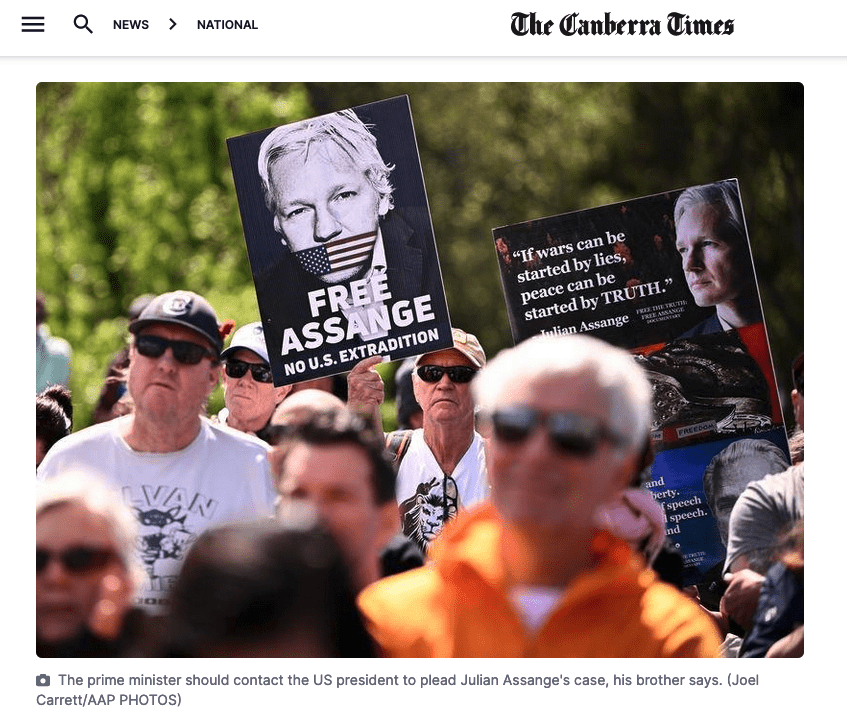