A portrait of imprisoned writer Liu Xiaobo hangs near the empty chair placed in his honour during the ceremony in Oslo, Norway in which he was awarded the Nobel Peace Prize in absentia on Dec. 10, 2010. Photo: AFP

The Empty Chair at the 2016 Melbourne Writers Festival 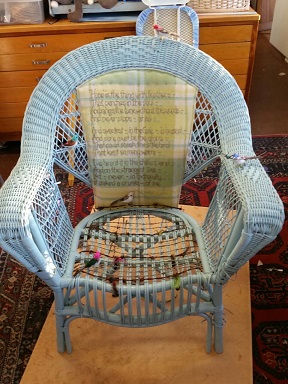 PEN has instituted a powerful symbolic gesture – The Empty Chair – that has become a feature of various literary events, including the 2016 Melbourne Writers Festival (MWF). At several MWF sessions an Empty Chair was on stage and the host of the panel read out the statement:

‘The Melbourne Centre of PEN International advocates for writers who are at risk in many countries around the world. In 2015 PEN International’s world-wide Case list included 1054 writers.
PEN actively campaigns on behalf of these writers who have been detained, imprisoned, tortured, forced into exile and in other ways silenced for the peaceful practice of their professions and in violation of their right to freedom of expression.
PEN calls for the investigation and prosecution of those who murder writers, a crime that is growing in frequency worldwide. The Empty Chair on the stage today is for a writer who cannot share this platform because of these circumstances.