The tide is turning for Assange: PEN Update 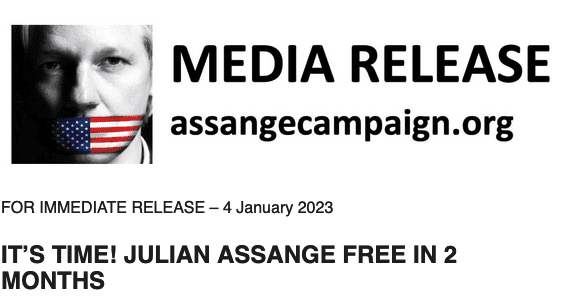 The tide is turning for Assange: PEN Update

Since a PEN Melbourne and Sydney meeting in Parliament House with senior Labor MP Graham Perrett, there seems to have been a flurry of movement giving rise to increased hopes that PM Albanese and his government are seriously seeking an unconditional release of Julian Assange.

The official Assange Campaign has released an optimistic press statement which is included below this timeline of events:

In an exclusive interview with Central News John Shipton said Prime Minister Anthony Albanese had conveyed through third parties that the government was “working on” his son’s case.

If so, it would be the first acknowledgment that the Australian government is actively in discussion with the US government about the matter.

“Anthony Albanese has stated that he was moved to bring Julian home. He’s sort of on a promise on it. He’s sent messages to me via third parties that he’s working on it, and so we expect to have Prime Minister Anthony Albanese to hold to his promise and we will continue in that vein.”

The Prime Minister’s Office, when contacted by Central News, would neither confirm nor deny conversations with Shipton through third parties had taken place or that there had been discussions with the US government, instead referring to previous statements made by the Prime Minister that he would not be commenting publicly on the matter.

28 November 2022: The five media organisations that first helped Assange publish leaked diplomatic cables urged the US government to drop its prosecution of the WikiLeaks co-founder because it is undermining press freedom. In a combined statement the Guardian, the New York Times, Le Monde, Der Spiegel, and El País wrote:

This indictment sets a dangerous precedent, and threatens to undermine America’s first amendment and the freedom of the press.

Obtaining and disclosing sensitive information when necessary in the public interest is a core part of the daily work of journalists. If that work is criminalised, our public discourse and our democracies are made significantly weaker.

“Australian citizen Julian Assange is still contained in Belmarsh prison, charged by a foreign government with acts of journalism. Mr Assange’s freedom will only come from political intervention. Will the government intervene to bring Mr Assange home?”

PM Albanese’s reply may have been enough to convince the UK’s minister for the Indo-Pacific, Anne-Marie Trevelyan, and its high commissioner to Australia, Vicki Treadell, who were both in the audience.

“ I, sometime ago, made my point that enough is enough. It is time for this matter to be brought to a conclusion. In that, I don’t express any personal sympathy with some of the actions of Mr Assange. I do say though that this issue has gone on for many years now, and when you look at the issue of Mr Assange and compare that with the person responsible for leaking the information, Bradley Manning, now Chelsea Manning, she is now able to participate freely in US society.

The government will continue to act in a diplomatic way, but can I assure the member for Kooyong that I have raised this personally with representatives of the US administration that it is time that this matter be brought to a close. This is an Australian citizen. As I said, I don’t have sympathy for Mr Assange’s actions, on a whole range of matters. But, having said that, you have to reach a point whereby what is the point of this continuing, this legal action, which could be caught up now for many years into the future? So I will continue to advocate, as I did recently in meetings that I have held. I thank the member for her question and for her genuine interest in this, along with so many Australian citizens who have contacted me about this issue.”

December: 2022 Daniel Ellsberg, who in 1971 leaked the Pentagon Papers, told BBC Hardtalk that he had been given US diplomatic cables “as a backup” by Julian Assange and challenged the US Justice Department saying “I am as indictable as he is on the exact same charges. I will plead “not guilty” on grounds of your blatantly unconstitutional use of the Espionage Act. Let’s take this to the Supreme Court”

“As far back as 2010, when WikiLeaks published the war cables, Rudd has repeatedly insisted the US government and Manning should be held responsible for the disclosure of secret material rather than Assange.” – The Age, 7 Jan, 2023

1 January, 2023: John Lyons made a controversial statement that has sparked a ray of optimism.

Speaking on ABC News Breakfast, Lyons, the Global Affairs Editor of the ABC,

predicted the unconditional release of Assange within two months. This could only happen by two scenarios: the UK refuses the extradition, or President Biden drops the charges. A third scenario of Albanese negotiating a Hicks style plea bargain with the US now seems unlikely if Lyons’ tip of an unconditional release is accurate.

7 January, 2023: The Age and SMH headlines: The year Assange walks free? Why there are cautious hopes By Matthew Knott. Extracts from his article:

Earlier this week, ABC global affairs editor John Lyons heightened anticipation by declaring on air: “My expectation is that within the next two months or so Julian Assange will be released.” Lyons’ prediction caused a frisson not just because of its definitive timeframe but because it was made by one of the country’s most experienced journalists. Lyons previously served as editor of The Sydney Morning Herald, as the ABC’s head of current affairs and investigations, and as executive producer of Nine’s Sunday program.

The main reason for the growing optimism is that Australia has a prime minister actively working to try to secure Assange’s release, even if it requires spending diplomatic capital with our most important ally. The Morrison government took a hands-off approach on the grounds Assange’s case should be allowed to play out in the British and US legal systems.

In opposition, Albanese said he believed Assange’s case had dragged on too long and needed to come to an end. During his early months as prime minister, he kept quiet about the issue, vowing not to pursue “megaphone diplomacy”. That changed in November when he gave a strikingly forthright response to a question by independent MP Monique Ryan.

“I have raised this personally with representatives of the United States government,” Albanese told parliament. “My position is clear and has been made clear to the US administration. I will continue to advocate, as I did recently in meetings that I have held.”

Albanese was essentially confirming he had raised the issue directly with Biden, given the pair met for 45 minutes just a fortnight earlier in Phnom Penh.

Then came Albanese’s decision, just before Christmas, to appoint former prime minister Kevin Rudd as Australia’s ambassador to the US. As far back as 2010, when WikiLeaks published the war cables, Rudd has repeatedly insisted the US government and Manning should be held responsible for the disclosure of secret material rather than Assange.

BELOW IS THE MEDIA RELEASE FROM ASSANGE CAMPAIGN