Today, the Committee has multiple objectives and functions. Primarily, it focuses on issues of translation and linguistic rights and the effects these issues have on readers and writers across the globe, including at a most basic level, access to literature. Concurrently it places great emphasis on the role that literary translation can play in enabling inter-culture dialogue and exchange. This takes place through a number of year-round activities, including: promoting literature in translation on the multilingual Diversity website, edited by an international Advisory Board of translators and writers from Macedonia, China, Colombia and Malawi among others; developing an e-collection of multi-lingual works of literature; the translation of works from widely spoken into smaller languages; working with other interested groups in campaigning and the creation of publishing partnerships; supporting PEN Centres worldwide in establishing and growing their own Translation and Linguistic Rights Committees.

The current Chair is Simona Skrabec based at the Slovene PEN Centre. PEN Centres with Translation & Linguistic Rights Committees have signed the International Declaration of Linguistic Rights. At PEN Melbourne, Committee members contribute to the work of the Committee. 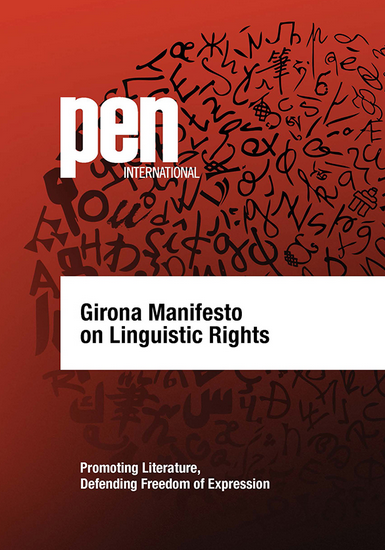 Developed by the Translation and Linguistic Rights Committee, the Girona Manifesto is designed to be translated and disseminated widely as a tool to defend linguistic diversity around the world. At PEN International’s 77th annual Congress the PEN General Assembly approved the Manifesto.

John Ralston Saul, International President of PEN said, “Many languages are in danger. Many are actually disappearing. The loss of one’s language, and through that loss much of one’s culture, can be seen as the ultimate removal of freedom of expression.“

The Manifesto declares PEN International’s ten guiding principles on linguistic rights. It is a ten point document designed to be translated and disseminated widely. Read more on it here.
.